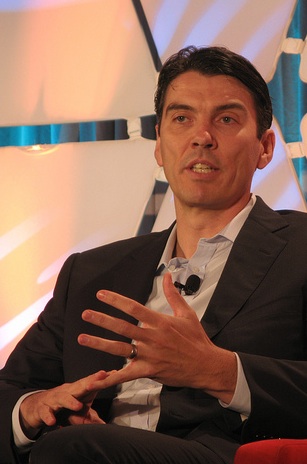 This new competition worries AOL CEO Tim Armstrong more than competition from Yahoo, which he didn’t even mention by name. At the tail end of today’s third quarter earnings call he noted:

AOL’s approach is to be competitive with Google and Facebook. We are are not focused on being competitive with people further down the chain. Facebook and Google are taking share in display advertising right now. It doesn’t mean we cannot take share either.

Before AOL (which is our new parent company) can take market share, however, it needs to start growing again. In the third quarter, overall total advertising revenues (search and display) declined 27 percent, with the display portion down 14 percent. Its annualized revenue for display advertising is less than $1 billion (about $775 million if you count display advertising on AOL properties and third-party networks).

AOL is still very much in transition, winding down international operations and unprofitable traffic distribution deals. The 24 percent drop-off in access subscribers is also placing downward pressure on advertising revenues since they account for many of those clicks. “AOL is not a great investment for short term quarter over quarter returns,” Armstrong warns.

Instead he’s trying to set it up for a long-term turnaround. His strategy is simple: better quality content combined with an aggressive ad sales force. Part of that will require going after core audience segments which are especially appealing to advertisers. Armstrong explained AOL’s content strategy by revealing his 80-80-80 rule. Women account for 80 percent of domestic purchases, 80 percent of purchases are done locally, and 80 percent of purchases are influenced in some way by “influencer crowds.” So expect to see AOL acquire or develop a lot more content targeted at “women, local, and influencers.” Hence, the focus on celebrity news and parenting (PopEater and ParentDish), local news (Patch), and tech blogs (Engadget and TechCrunch). Patch added 133 local sites in the quarter, well on its way to 500.

There is definitely pent-up demand for online display advertising. Now, AOL has to go get it before Facebook and Google gobble it all up.