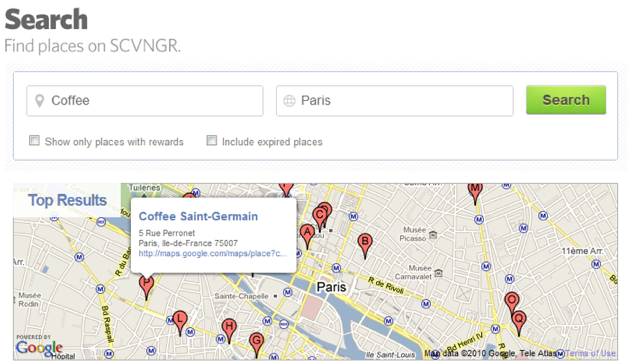 Location-based game SCVNGR is going global, and it’s getting a little help from its friends down in Mountain View. Today, the company is switching to a new, improved database of venues — the businesses, restaurants, bars, and other locations that its users ‘check into’ — and it’s also adding international support. The source of the data? Google, which has given SCVNGR access to the developer preview of its Places API both in the US and abroad.

Now, SCVNGR has technically been available internationally before now because you could download its mobile apps for Android and iPhone. But CEO Seth Priebatsch says that the experience left a lot to be desired, because SCVNGR didn’t have a robust ‘Places’ database (you’d open up the app and usually would have to manually enter the venue yourself, which is a big hurdle). Today’s update fixes that.

Before now, SCVNGR had relied on data from GeoAPI (which was acquired by Twitter last year), but its dataset was US-only, hence the lack of international support. Oh, and it’s no accident that SCVNGR is among the first companies to get access to this places API —the company has a special relationship with Google because it was one the first investments made by Google Ventures.