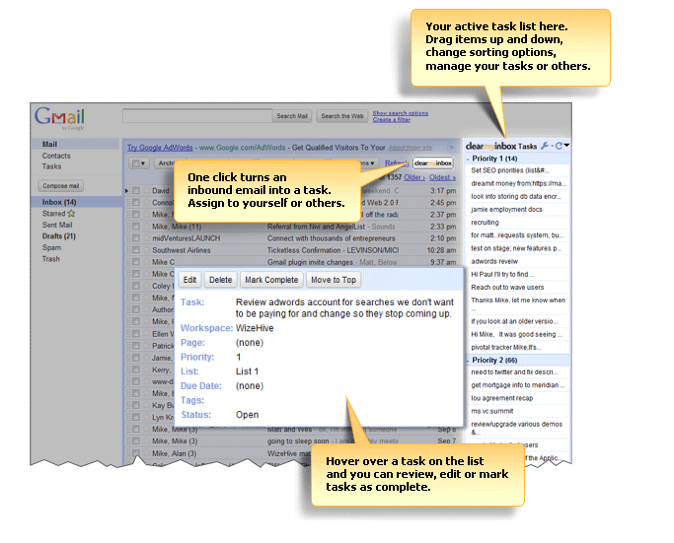 Gmail is a great communications platform for personal and professional use but its task manager is fairly simple. Google recently launched Priority Inbox, which does help prioritize email, but tasks are can be a separate tool that people use for organization. Today, the folks at Wizehive are launching ClearMyInbox, a plug-in that adds a comprehensive task manager (like Producteev) to any Gmail account. The app is in private beta but we have 1000 invites for TechCrunch readers; just use the code “tcrunch” here.

Similar to Rapportive, ClearMyInbox displays your task list to the right of the Gmail screen. It allows you to turn emails into tasks, create tasks, manage your own task list, move items up and down lists, mark items as complete, and assign tasks to others from within Gmail without having to log into another system. And you can sync your tasks and task lists with an iPhone app and with WizeHive accounts.

Similar to WizeHive, ClearMyInbox organizes tasks and task lists into Workspaces. You can share workspaces with different groups of people (ClearMyInbox currently limits you to creating 3 workspaces). The tool is free and currently works with Chrome and Firefox.