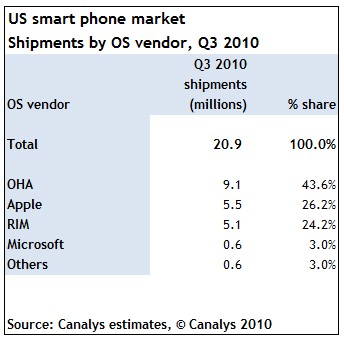 In a report that is raising eyebrows this morning, UK-based market research firm Canalys estimates that total shipments of Android phones in the U.S. during the third quarter were nearly twice as large as iPhone shipments. Out of 20.9 million smartphones shipped in the U.S., about 44 percent, or 9.1 million, are running the Android OS. Apple, shipped an estimated 5.5 million phones, or 26 percent of the total.

Apple ships only one phone, the iPhone. And it became the single largest smartphone in the U.S., surpassing all Blackberry phones combined (with RIM shipping an estimated 5.1 million phones, or 24 percent). Apple’s market share in the U.S. jumped 4.5 percent from the second quarter, but the collective share of all the Android handsets now on the market jumped by nearly 10 percent (from 34 percent).

On a worldwide basis, Canalys puts Android’s share at about 25 percent, also larger than the iPhone’s global share of 17 percent (and RIM’s 15 percent). These numbers are surprising given the fact that Apple claims to be activating 275,000 iOS devices a day, with Google a bit lower. Activations and shipments are different, but they should be more or less in line with one another. The numbers that have come out from both Apple and Google suggest that Android and iOS devices are neck-and-neck, not that Android is a length ahead. But Apple’s activation numbers include more than just iPhones (iPads are in there too).

Other market research firms such as Nielsen and Gartner have yet to release their third quarter estimates. Will their numbers tell the same story as the Canalys numbers?

Update: NPD Group came out with its numbers, which are pretty close. It also shows Android in the U.S. on 44 Percent of smartphones compared to 23 percent for Apple’s iOS, and RIM in third with 22 percent.