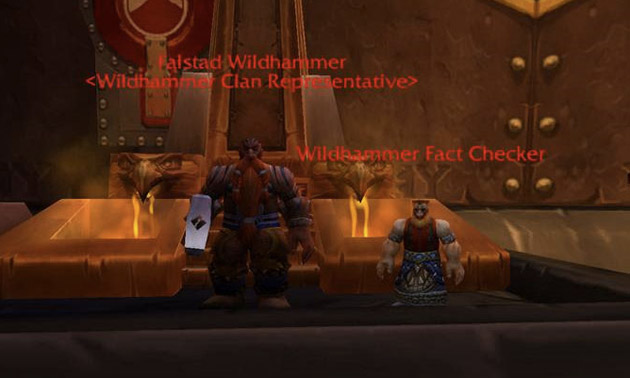 Who can forget the Red Shirt Guy? He’s the young man who, at Blizzcon last week, told Blizzard something about Falstad Wildhammer being on the Council of Three Hammers. I don’t know, I’m not as familiar with the World of Warcraft lore as I’d like to be. Which is not to say I’m above killing hours on WoWWiki looking up this or that faction, but clearly I’m not in the same league as Red Shirt Guy. Moving on. Blizzard was so impressed with the young man’s knowledge that they’ve actually put him in the game.

His name in the game is the Wildhammer Fact Checker, and he’s wearing a red shirt. Pretty, pretty awesome.

Um, no. A blue post on the WoW forum confirms its authenticity.