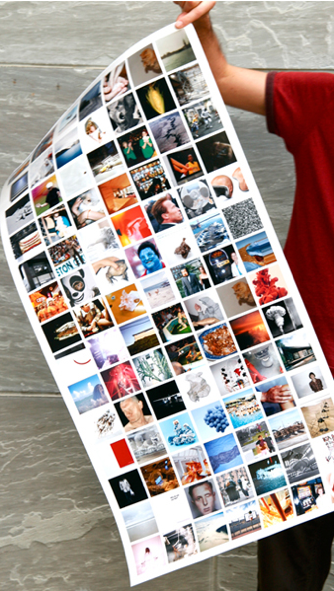 Last month we covered a service called Printing Facebook which turned all your Facebook friends’ profile pictures into a giant 20X40 inch “real life Facebook wall” poster. At the time we hoped that Facebook wouldn’t “throw a hissy fit” over artist Benjamin Lotan’s use of its trademark and design aesthetic.

Well it might have not been a hissy fit exactly, but Facebook lawyers did end up approaching Lotan, who has since changed his site’s name to Social Printshop.

“Despite past reports which have cited Facebook’s bullying tactics, I actually found them to be quite cordial and polite. They even mentioned they were ‘excited about the project’.

Perhaps they learned from the bad press they had gotten out of a few incidents (Placebook for example)?”

Lotan asserts that Facebook gave him enough time to think of and buy a new domain name and helped him formulate a timeline for changing over everything about the Printing Facebook site including its design.

Lotan says that other than the Facebook legal intervention, business has been going well and that he is selling hundreds of posters. To continue with the transition from Printing Facebook to Social Printshop, Lotan today launched his Tumblr poster product and plans are in the works for “Printing” Twitter, Foursquare and Flickr posters as well as other non-poster products related to social sites.

These products include a physical Facebook, which Lotan hopes “will return one’s social graph back into the physical form which Zuckerburg originally chose to name the site after.” Uh, okay.

Social Printshop is currently bootstrapped but Lotan hints that he’s gotten an offer from investors and will be seeking funding soon, as the service has now become more than full time job.