In conjunction with the company’s developer conference, PayPal announced a slew of news and product releases this week, including a new micropayments product and an apps platform for businesses. But tucked away in a release was another piece of news from PayPal that could be huge. PayPal just released a new version of its popular iPhone app that allows users to find businesses near their immediate location that accept PayPal as a form of payment. Launching in San Francisco initially, the feature encourages merchants to attract nearby customers to their stores by posting deals and promotions to the app as an incentive for customers to visit their businesses.

Customers can search by category and location, and find and select stores, services, or special offers. Users can pick up the goods or services in person, but pay the merchant using their PayPal app. Users can also use tags from Bling Nation, a startup that has partnered with PayPal to use the startup’s mobile payment chips to deduct funds from a PayPal account.

One of the big selling points around using PayPal for merchants is the ability to offer deals as an incentive to drive buyers to a store or restaurant. Whether it be Groupon-like daily deals or just ordinary coupons, there’s no doubt that deals do help drive online to offline sales.

PayPal President Scott Thompson tells TechCrunch (see video below) that eventually this local feature will have “ubiquity,” meaning you’ll be able to access these merchant listings and pay with PayPal wherever you are in the world. Local is one of the key parts of PayPal’s future strategy, says Thompson. He’s confident that has the world becomes more connected, eventually all local merchants will accept PayPal as a payments option for in-store purchases. 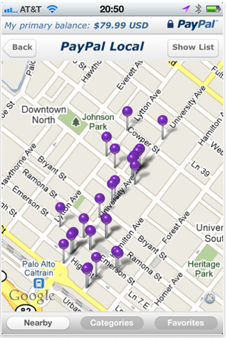 For PayPal, local payments certainly makes sense. Online to offline sales is a big part of local commerce, and if PayPal can become a payments mechanism in the local market, it could be pay off in revenue for the company.

One competitor worth noting in the local payments space is Google Checkout. While Google Checkout doesn’t have as extensive of a reach as PayPal, Google Checkout has an ace in the hole when it comes to Google Places. Google Places allows local businesses to claim and edit a page, post realtime updates (eg, “happy hour tonight”), post reviews, create a custom QR code, and even offer coupons. And Google indexes and highlights these pages in search results, most recently launching a more integrated placement of Places page within Google search.

Google could easily turn on a transaction (such as a daily deal) for these merchants, and use Google
Checkout as the payments mechanism. The same experience could extend to mobile phones.

The advantage Google has over PayPal is that with Places, these relationships with local merchants are already built into the search giants business. At last count a few months ago, Google had Places pages in place for over 4 million businesses but I’m sure this number is higher. PayPal on the other hand will have to forge new relationships with all these local businesses to get them on board with their payments platform. Not only do they have to find the businesses, but PayPal has to teach them how to use their mobile apps as a payment mechanism. Scaling PayPal’s local feature will be a huge endeavor for the company, which is why PayPal is testing the feature out in a limited market in the San Francisco.

This why it makes sense for PayPal to form partnerships on its local endeavor. Google is an unlikely partner considering that the company already has its own payments platform. Facebook Places could be a potential partner (PayPal is already a micropayments partner for the social network’s virtual currency platform Credits). Facebook is rumored to be turning on a deals feature for Places and PayPal could be a way to process these payments. And Groupon is rumored to be brokering a payments deal with PayPal as well.

So while Google Checkout still doesn’t have the sort of users numbers that PayPal does in the payments area, Google has much more in the war chest in terms of local. With local up for grabs, the battle between the two payments platform just got a whole lot more interesting.