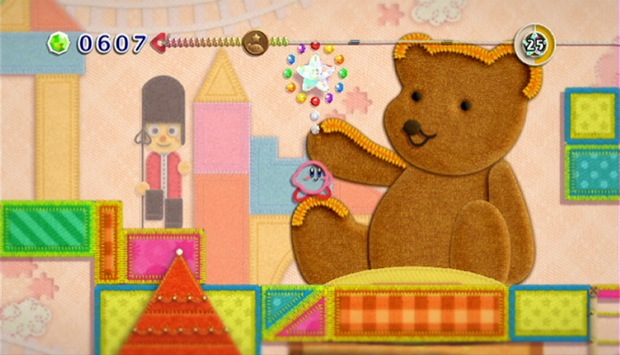 It’s very rare to find a game that is 100% acceptable for my 5-year-old. Many games are just a bit too violent – Super Smash Brothers was pretty rough and Super Paper Mario encouraged self-mutilation – and others, like Mario Kart Wii, are so boring at this point as to induce coma in a healthy 35-year-old.

That’s why I was excited to play Kirby’s Epic Yarn. This game isn’t as hard as the SMB franchise (in fact it’s dead simple and does not actually require you to play it at all) and it’s great for kids because of the “yarn shaded” animation and the primitive storyline. Best of all it allows beleaguered dads to finally have a little fun while playing a kid’s game.

Now before you go all metaphysical and equate the Kirby franchise with the early work of Scorcese, let me stop you. You don’t need to even understand what Kirby is to play this game and, in fact, I would encourage you not to read this review if you are a self-described Kirby fan. This is for Dads who want to play a platformer with their younger kids and have thus far been stymied by difficulty levels.

The story, if understand it, involves Kirby (a pink creature with a long back-story I couldn’t be bothered with reading) being sucked into someone’s sewing basket or something and having to live there with some dude who is also the yarn king. You’re supposed to sew up the yarn king’s world and save his kingdom. Then you get attached to the seat of some hippie’s jeans in the Haight and, in the end, become a urine soaked mess hanging out of a park trash basket (that last part is pure conjecture.) You also have to collect beads.

The real value in this game is the interface. If you’ve been flummoxed as to how to play platformers with younger members of your family, this game will solve most of your problems. Junior’s hand-eye coordination is off? No problem. You never die! If you fall off of the screen an angel brings you back up to land with the other, surviving player. The worst that can happen is you’re pinched by one of the enemies who makes you drop all the jewels and beads you’re supposed to collect. You can then yell at your son (or daughter) to pick up all the beads again as you sip your beer.

If the other player is stumped, you can pick them up and put them on your head, carrying them around like a plump ham until you throw them into enemies and structural elements. Gameplay is amazingly simple. You lasso enemies to “pop” them into their original yarn/button elements and you jump around a lot. Bosses are fun because the kids can just hang back while you do the dirty business of getting the whole family to the next level.

The levels are as creative as anything in the SMB world and there’s even a furniture collecting sub-game for the OCD kids in your life. Levels are easy to finish and there are excellent interstitial segments where you and your buddy turn into another object – a tank, a flying saucer, a penguin on a surfboard – so you don’t get bored jumping from platform to platform. The graphics are excellent for the Wii and the colors bright and whimsical. Although Kirby looks like an hydrocephalic, hairless rat, you have to admit he’s pretty cute when slashing his enemies to ribbons.

Generally this game offers a little something for everybody. Kids get to feel the accomplishment of finishing a platformer while Dads and Moms get to have a little fun. I wouldn’t recommend this game to kids older than eight, however, simply because it’s a bit too juvenile. If you want a good game you can play with the kids, however, Kirby is your blob.