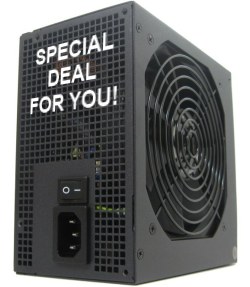 Putting together a system can be an expensive process, and one is tempted to cut corners in areas where performance doesn’t seem to be a an issue. A cut rate GPU? Not likely… but, say, the PSU? They’re all pretty much the same, right? If they’re rated at such and such, that’s all that matters? Ehh, not so much.

This little roundup over at Anandtech serves as a reminder that you really do get what you pay for with pretty much every component. The cheap TechSolo PSU, though advertised at 550W, barely managed to consistently put out half of that, and flux in the power levels mean mischief for a precision instrument like a modern GPU.

Obviously it’s no use going hog wild, either; once you get past the mid-range, like other components, you’ll get diminishing returns and pay bundles for minor luxuries like high-quality braiding or a small drop in noise levels. I’m glad this little comparison came out when it did, as I’m working on putting together a system myself, and the Antec TruePower New looks like a solid contender.