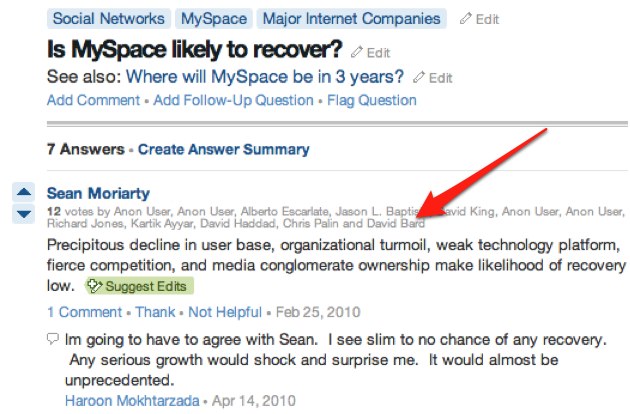 A simple question on Quora yields some fascinating comments: “Is MySpace likely to recover?”

Google VP Corporate Development David Lawee left a brief and sarcastic “Is this a real question?” response. Which is noteworthy because Google is a major advertising partner to MySpace. Generally speaking, partners are nice to each other in public, but not here. 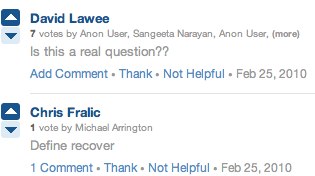 The top answer though is from Sean Moriarty, the former CEO of TicketMaster, who says “Precipitous decline in user base, organizational turmoil, weak technology platform, fierce competition, and media conglomerate ownership make likelihood of recovery low.”

And one of the people who up-voted Moriarty’s comment on October 6 is David Bard, the Senior Interaction Design Strategist at MySpace. He’s likely one of the key guys on the front line of Futura, MySpace’s last push for relevance. And he apparently agrees that the “likelihood of recovery low.”

At least MySpace has one thing going for it – senior employees who are willing to speak their mind, whether it’s sharing internal data with us or upvoting comments on Quora. Most Yahoo’ers always waited until after they’d left to really unload on their former employer.