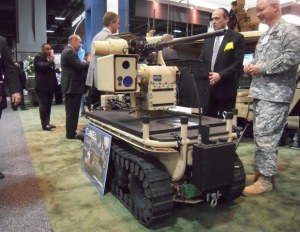 It’s a well-established tradition at tech conventions, where nerds like us abound, to stock one’s booth with beautiful women — “come for the girls, stay for the iPod cases” seems to be the idea, and in general it works. But how do you attract the attention of highly-disciplined Lieutenants and cold-hearted strategists? Why, a robot with a .50-cal, of course.

That’s Northrop Grumman’s approach, anyway. At the Association of the U.S. Army con in Washington, they’ve showing off a CaMEL packbot with a .50 caliber machine gun controlled remotely by a touchscreen. Of course, like a booth babe, it’s a trick. Wait, that came out wrong. It’s a ruse.

NG doesn’t actually make these things: “Quite frankly, a weapon on a robot brings people into the booth,” says Jon Anderson, who ran the booth. But will they ever? Apparently, the army just hasn’t bought into it yet. Chances are it’s a bit difficult to fit one of these things into the order of battle. And they look pretty heavy; if they break down, you’ll need a non-weaponized one just to carry the first one out.

It’s only a matter of time, though. That’s it for us humans.