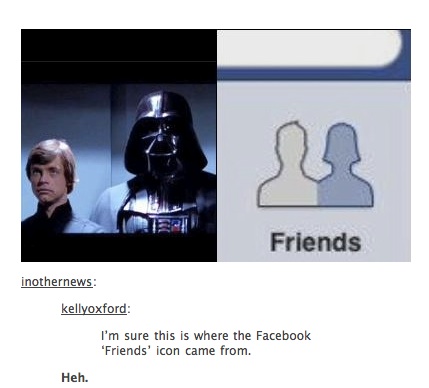 Ever wonder what the inspiration was for the Facebook Friends icon, the one with the outline of two people side-by-side? Neither have I. But now that Foursquare founder Dennis Crowley put up this side-by-side comparison of images on his Tumblog, I will never be able to look at the outline of the woman friend’s bob haircut again without thinking of Darth Vader’s helmet.

It’s just a funny photoshopped juxtapostion with the caption, “I’m sure this is where the Facebook ‘Friends’ icon came from.” I don’t want to psychoanalyze Crowley too much on this. He simply reblogged something he found amusing from someone else’s Tumblog. (That is what you do on Tumblr. It’s like retweeting). But you have to wonder if he doesn’t feel a little bit like the Luke Skywalker friend.

Before closing Foursquare’s last $20 million round, he was talking to Facebook (and others) about a possible acquisition instead. The deal never happened, and Facebook went on to launch its own rival geo-location product, Facebook Places. Interestingly, Foursquare was present at that launch., but Crowley definitely has mixed feelings about Facebook. Sort of like Luke did about Darth Vader.