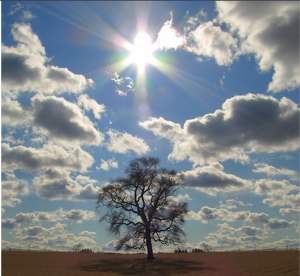 The US solar market took another step forward this week with the federal government’s approval of Solar Millennium’s plan to build a massive thermal power station in Blythe, California. Located between Phoenix and Los Angeles in the arid Palo Verde Valley, this thinly populated city will soon be home to the world’s largest solar project.

The Interior Department’s Bureau of Land Management delivered the final greenlight, wrapping up a (relatively swift) year-long approval process. Technically, it is the government’s first approval of a parabolic trough power plant, which uses curved mirrors to direct the sun’s heat towards a pipe that contains a heat transfer fluid. The heat from this fluid helps create steam which ultimately powers a turbine

Solar Millennium, a German firm, plans to build four plants on the expansive property with a total capacity of 1,000 megawatts— which is roughly on par with the country’s current total solar capacity. With 1,000 MW at completion, the station would be able to power more than 300,000 homes.

The hope, the company says, is to start supplying the grid with electricity by 2013. In terms of regional economic impact, Solar Millennium predicts that the project will hire 1,000 people during the construction phase and 220 permanent workers (once its operational).

In the meantime, there’s quite a bit of construction to be done which will require significant financing. In a press release, the company said it has secured enough cash for the first wave of construction, which could begin as early as this year, but acknowledged that it is heavily dependent on government incentives and pending loans.

Speaking of the federal government’s approval, Solar Millennium’s CFO, Oliver Blamberger says, “This paves the way for the start of construction of the first two 242-MW plants before the end of the year…This is also good news for our advanced talks with the US Department of Energy on the loan guarantees for which we have applied. A successful conclusion of this process would secure more than two thirds of the financing volume of the first two planned power plants through the American Federal Financing Bank.”

As we mentioned in a post on Monday, the US solar market is ramping up significantly, with capacity expected to grow roughly 30x over the next 10 years to 44G. But the capital intensive industry will need to continue to raise heaps of private capital (and benefit from generous government policies) to get there.