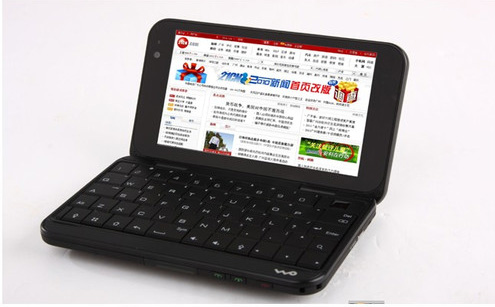 The chief problem with tiny clamshell computers like the Viliv N5 or UMID mbook BZ is Windows. The OS just doesn’t work well with tiny navigation controls or underpowered systems. However, Android does and that’s why I’m excited about this next round of clamshell devices particularly this one from Dion Computers

Inside the clamshell casing is a 4.8-inch WVGA capacitive LCD touchscreen with LED backlighting. Multitouch is supported, but there’s also a small optical mouse nub for navigation as well. There’s a small QWERTY keyboard plus a 1.3MP webcam, mic, 3G/2G wireless chips, GPS, FM radio and several unnamed I/O jacks. Overall, it seems awful similar to the Viliv N5 although a bit taller and less wide than the Windows clamshell.

This little Android 2.1 machine is said to be only a concept, though. Chances are a bunch of these sort of computers will drop at CES 2011. The form factor has been around for years; now it’s time to load them up with a proper mobile OS and release them to the masses (of geeks).