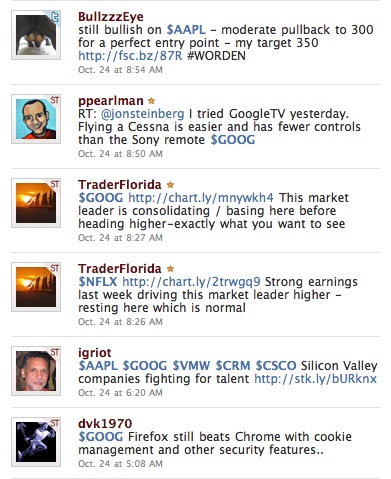 I’ve got to admit it: When it comes to financial advice, I just don’t trust my friends. And I certainly don’t trust random people on Twitter or other social networks. I don’t think I am alone. Most social finance sites have yet to gain mainstream acceptance. Just look at the pivot kaChing just did by renaming itself Wealthfront (and focusing on professional money managers instead of amateurs who outperform. It’s not that I think amateur investors are untrustworthy, it’s just that I don’t know who to trust.

For that reason, among others (I don’t trade stocks), I haven’t really spent much time on StockTwits either. But StockTwits just turned on a new feature a few days ago that finally made it click for me. It lets you follow stocks on Twitter, not just the people talking about them. All of a sudden, it is not about trying to figure out who you trust, it is about getting all the buzz on the stocks and companies you care about in realtime. This ability to follow stocks instead of people is a perfect example of how to take Twitter’s interest graph and put it on steroids.

People on StockTwits use a convention similar to hashtags whenever they Tweet about a stock. They put a “$” in front of the ticker. So you can find what people are saying about $GOOG or $AAPL. Now you can follow each of those tickers as well, and any mention of those stocks is placed into your StockTwits stream, along with the Tweets from the people you follow on the service as well. You can even follow mentions of private companies such as $TWIT and $FBOOK (hey, those aren’t publicly traded stocks—not yet, anyway). As people start following stocks, you can see their watchlists. Here’s StockTwits founder Howard Lindzon’s followed stocks, for instance, and here’s mine.

Before now, StockTwits was about random and not-so-random people talking about stocks on Twitter. But unless you knew these people already, were you really going to take stock-picking cues from someone named BullzzEye or RaginCajun? No offense. Those guys could be the most amazing traders on StockTwits, I have no idea. I really don’t have the time or inclination to find out either—which could be more my loss than theirs. But again, I don’t think I am alone here in being wary about taking stock advice from random strangers on social networks.

Following stocks instead of people changes the whole equation in my mind. It is no longer about trusting people, it is about collecting data. If I am trading $AAPL or $GOOG, I may very well learn about a market-moving announcement first on Twitter than anywhere else. By following these “stocks” on StockTwits, it is really more of a realtime warning system for traders. In the stock markets, timely information is money. And by following these filtered streams, I get both financial information and product/technology news. So as a news junkie, it is a very interesting filter for me. Also by following Tweets about a specific topic (anyone Tweeting about $GOOG or $NFLX), over time I should be able to figure out who to trust based on the quality of their Tweets on the subject, and then I can start following them if I want.

StockTwits has been evolving for some time beyond being a simple front-end for Twitter, and this makes the service even more compelling. But I would rather consume these stock-specific streams on Twitter itself. How cool would it be if you could follow $GOOG on Twitter or any other interest stream for that matter? StockTwits would need to create accounts for each ticker symbol (if that’s possible), or perhaps some sort of set of Twitter lists that people could follow. But this really points to the next step for Twitter itself. It needs to make it easier to follow your interests, not just people. 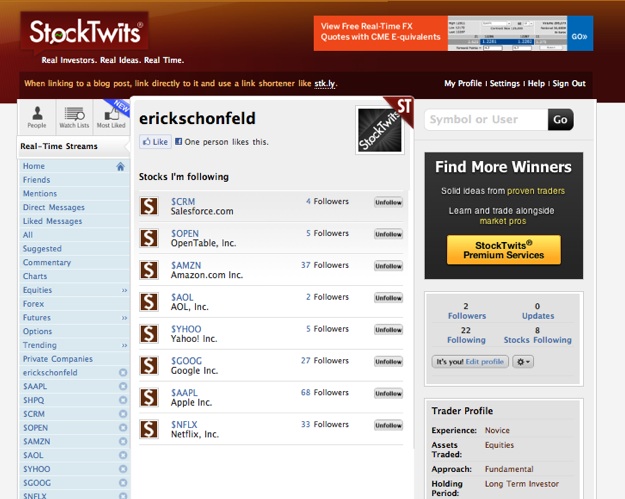