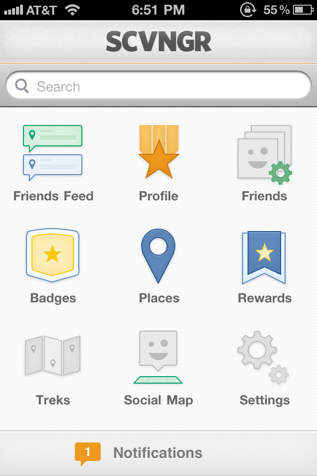 SCVNGR, a location based game that competes with the likes of Foursquare and Gowalla, has gotten plenty of attention for offering a deeper gaming experience than most of its competitiors — instead of just ‘checking in’, the game prompts users to complete various challenges, which can involve things like taking goofy photos or solving a puzzle. One thing SCVNGR hasn’t been so good at, though, is connecting with your friends (which is where Foursquare excels). Today, a few days after announcing that it has 500,000 users, SCVNGR is launching revamped versions of its mobile applications for iPhone and Android that look to fix this — and they look nicer to boot.

The first thing you’ll notice about the new apps is the fact that they look a lot like the Facebook iPhone application — after firing it up, you’ll see a grid of main options, including a center icon for Places and a Notification bar across the screen. CEO Seth Priebatsch isn’t shy about this (he points out that everyone is used to the Facebook app by now) and says that this design has a few advantages. For one, it’s now much easier to access the SCVNGR Rewards you’ve earned (which let you get discounts at participating venues). But there are some more substantial changes too.

The biggest is the addition of a new ‘Social Map’. It’s pretty straightforward — it plots where your friends have recently checked-in on a map and lets you see how long ago they were there — but it’s something that SCVNGR hasn’t offered before, and helps address the aforementioned issue with connecting with friends. The apps also include some major tweaks to the SCVNGR friend feed.

Before now, SCVNGR let you see a stream of your friends’ recent check-ins, along with any accompanying photos they might have taken — but the feed wasn’t done very well. The first problem was a matter of noise: oftentimes when people are at a venue and they check-in on SCVNGR, they’ll generate multiple stories (because they’ll complete multiple Challenges).

SCVNGR also didn’t do any kind of smart filtering to identify which stories were most relevant, nor did it attempt to cluster related stories. The new version fixes this: related stories will now be grouped, and there’s an improved version of the feed that can sort items by popularity. It’s now also possible to comment on a user’s activity, which wasn’t possible before. 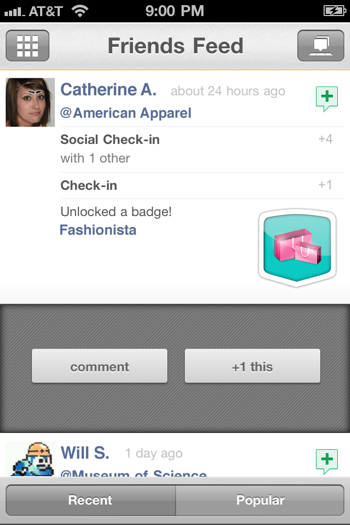