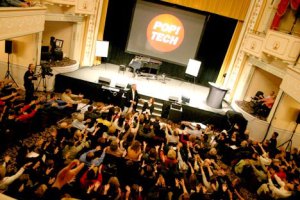 If there’s one thing I know for certain it’s that Camden, Maine is lovely this time of year. I know this because since I arrived here, a little more than 24 hours ago, every man, woman and cab driver I’ve encountered has been sure to tell me.

“Welcome to Camden! You’ve come at the right time of  year!”

Another thing that everyone here is keen to point out is that PopTech, the conference that has dragged me 21 hours out of my comfort zone to the jewel of the Maine coast, is not TED. I mean, yes, like TED, it claims to be filled with “world-changing people, projects and ideas“; yes, like TED, it costs a small fortune to get here and, yes, like TED, the attendees and organizers seem somewhat unhealthily obsessed with TED. But despite all of that, it isn’t – and everybody involved wants to be quite clear on this – TED.

As if to underscore that message still further, the theme of this year’s event is ‘Brilliant Accidents, Necessary Failures and Improbably Breakthroughs’ which, for the first few hours of day one, translated as ‘why things you might have seen at TED are bullshit.’

Kevin Starr of the Mulago Foundation spoke about evaluating whether fashionable ‘world-changing’ inventions have any real value. A “big-ass straw” that promises to filter water in real time as you drink it? Bullshit. It takes three minutes to filter a glass of water and costs well over a week’s income for people in the poorest regions of the world to buy. One Laptop Per Child? Starr dismisses it out of hand: “what’s the point?”. This despite the fact that not so long ago Nicholas Negroponte previously presented the device – to rapturous response – at, well, PopTech.

Next came Water For People‘s Ned Breslin, taking to task companies who build wells in the developing world but don’t bother to check back a year or so later to see if they’re still working. His solution was an app – Flow – which encourages charity workers to report which wells are still operational and which aren’t. (It seems neat, but I couldn’t help but wonder – as he had urged us to do with the wells – whether anyone will be using it in five years time.)

By the afternoon of the first day, though, the failure theme had started to run out of steam. Which I suppose is appropriate. Instead we enjoyed a guy who plays drums using a special glove and a Wii-mote, we heard David de Rothschild talk about making a boat out of recycled materials and sailing it across the Pacific, and we listened to Siddhartha Mukherjee discussing the history of cancer (every attendee receives a free copy of his book, The Emperor of All Maladies: A Biography of Cancer.) And with that, the anti-TED conference had morphed into a kind of mini-TED. The speakers were fascinating and talented and inspiring and all the things good speakers should be, but PopTech’s unique selling point remained hazy at best.

It was only when I grabbed drinks later with some of the attendees that I started to understand what makes PopTech different and why some had even stopped attending TED and chosen to come to Maine instead. “TED is all talk and no action now” said one. “At TED it’s almost impossible to get to meet the speakers; here everyone just mingles together” said another. While not mentioning TED directly, board member (and PDF founder) Andrew Rasiej emphasised that PopTech is less about lectures and more about starting conversations (metaphorically and literally) between attendees that will last throughout the rest of the year.

And despite the $3,000 ticket price, it’s that pseudo-egalitarianism where PopTech beats TED hands down. TED has become such a celeb-filled mutual handjob that, rather than being a means to an end, attending the conference is the end. People attend, they talk a good talk, they give a standing ovation and then they leave. Like making friends on MySpace, the act of showing up comprises the entirety of the relationship. I mean, does anyone really think that Bill Gates needs to come to TED to meet Bill Clinton? Or that the average TED attendee is going to get a meeting with either?

At PopTech you’ll find fewer celebrities (cf OK Go) and much less backslapping. Instead you’ll meet 600 extraordinary, ordinary people (to steal Condoleezza Rice’s book title) stranded together in Maine who have no alternative but to talk to each other and make connections. A guy who is using a quirky feature of SMS to help HIV education in Africa connects with – someone using mobile phones to assist medics in emerging markets connects with – a guy keeping track of functioning wells in Africa connects with – a dude who overcame personal challenges helps lions connects with – and on and on, ad infinitum, ad meliora.

Those people have come to PopTech not (just) because it’s cool, but because they want to meet other interesting people with whom they might be able to continue working after the conference ends. I’ve met at least half a dozen people who had made contacts at PopTech that resulted in actual, real-world partnerships either in the form of mentorship, investment, technology or distribution.

And if these relationships bear fruit and the people, projects and ideas born become world famous… well, then maybe in a year or two you’ll see them at TED.

PopTech continues through to the end of Saturday; you can watch the live stream here – videos of previous speakers are here.