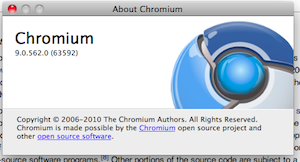 Whenever I ask Google about the versions of Chrome and Chromium, they’re quick to point out that the numbers don’t mean much these days. That said, they still show how quickly the search giant is able to get features implemented that they want to see in their browser. And they’re apparently not happy with the already fast speed at which things are progressing. They want things to go faster. So they’re working to speed things up even more.

A posting in their Chromium Google Group notes they’d like Chrome 8 to hit the beta stage sometime in the next several days. That’s pretty crazy considering that it was only 3 days ago that Google officially released Chrome 7. “I’m working to shorten the beta cycle for this release as much as possible,” a developer wrote a couple days ago noting that meant they had to focus on blocker bugs (the bugs stopping a version from hitting beta). The developer also notes that this is a part of making sure Google’s ultra-fast six week release cycle remains feasible.

Chrome 8 hit the dev channel a couple weeks ago, and seems pretty solid already, so they’re likely to hit their target. Notably, this version brings the option to have Google Instant baked into the Omnibox.

And with version 8 about to go beta, perhaps it shouldn’t be a surprise the Chromium (the open source browser on which Chrome is based) already hit version 9 today.

It’s certainly possible that we’ll see Chrome 9 released before the official build of Internet Explorer 9 (currently in public beta). Even if the numbers don’t mean much, I’m sort of wondering what happens in the next year — are we really going to see Chrome 14, 15, 16, etc?