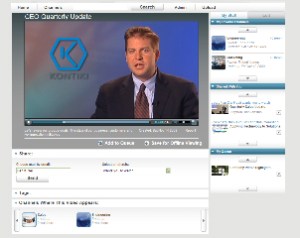 Enterprise video communications company, Kontiki, has raised $10.7 million in series B funding led by the company’s earlier backers, MK Capital, and joined by New World Ventures and Cross Creek Capital. Kontiki aims to give big corporations their own private Youtube, or a way to use video to connect and teach employees, decrease travel expenses and increase productivity.

Kontiki’s chief executive Eric Armstrong says his product could ruin the reality TV series “Undercover Boss.” That’s the show where CEOs from massive, public companies go work in the ranks for a week, and surprise their employees with an identity-reveal at the end, bestowing gifts upon their favorites, and changing corporate policies to make everyone work better together. Why ruin a good thing? It’s not intentional. But one of the most popular uses of Kontiki’s video delivery software-as-a-service is to broadcast quarterly CEO meetings live, and then offer them again on-demand, so all employees can put a face to the name of their leader.

Gartner researchers predict that video will grow to represent two-thirds of traffic over enterprise networks by 2015. Another enterprise video use-case that’s popular among Kontiki’s customers, Armstrong said, is the delivery of training and compliance materials by video-on-demand.

The Sunnyvale, Calif. company says it has been gaining ground in the enterprise market because its technology doesn’t require companies to upgrade their networks to accommodate online video traffic, and it doesn’t require equipment expenditure, or IT maintenance.

Armstrong says Kontiki will spend its new-found capital on hiring engineers, marketing and sales talent. The company has 34 employees today but expects to become a 50-person operation within a year. It plans to deliver a product release that works on iOS and Android mobile devices within the year.