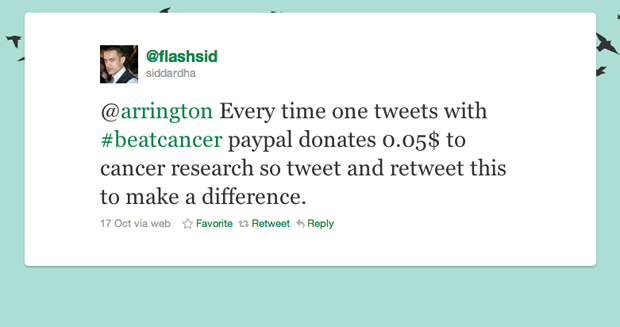 Two weeks ago cultural theorist Malcolm Gladwell wrote a piece decrying social media’s power to effect any actual social change, using the 1960’s Civil Rights movement as a baseline. Today Twitter co-founder and vodka enthusiast Biz Stone continued the intellectual bitchmeme in the just as lauded old media venue The Atlantic by unsurprisingly arguing the exact opposite, that Gladwell is wrong and that social media (namely Twitter) has already been responsible for quite a few important gestures of activism.

To bolster his somewhat solipsistic argument Stone brings up how Chinese found a way to access Twitter and report during the Tiananmen Square protests of 2009 and the fact that Twitter is the only way Chinese citizens can communicate about the imprisoned Liu Xiabo‘s recently garnered Nobel Prize for advocating political reform in China. Fine.

Stone also attempts to put the smackdown on Gladwell by using his own logic against him and draws a hypothetical between “the strength of weak ties” that set off The American Revolution with the ride of Paul Revere (an analogy that Gladwell brings up in The Tipping Point) to the “weak tie” phenomenon that is Twitter. Sure.

But the real issue here is that Stone and Gladwell are arguing about two different Twitters. Gladwell is deriding the Twitter where thousands of Westerners changed their profile avatars to green but committed little other action in support of Mir Hossein Mousavi during the Iran election (#iranelection) and Stone is advocating the Twitter that allows ethnic violence in Kenya to be quelled by a single Ushahidi text message, signaling a huge potential for future applications of social media as a tool for social good, applications which don’t exist currently.

While most of us live in Gladwell’s Twitter, that doesn’t preclude Stone’s from existing. And to save you the trouble of re-reading their extremely tl;drable takes on each, here are the most resonant statements from both.

“The American Revolution and Civil Rights Movement were not tweeted, but to suggest that emerging tools like Twitter have no part to play in the future of meaningful change is absurd.” — Stone

Basically, the revolution might be tweeted, the moment we stop feeling so self-satisfied about retweeting it.