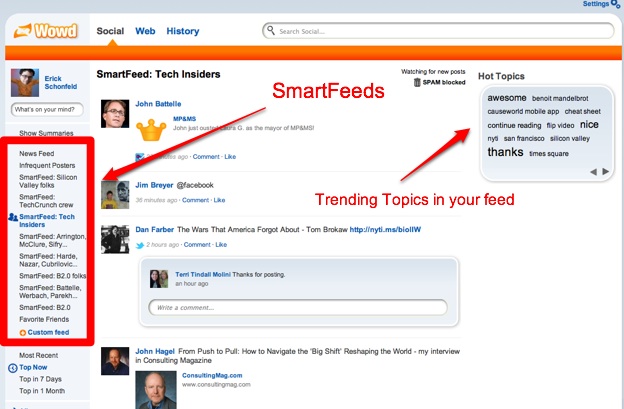 When Mark Zuckerberg launched the new Facebook Groups earlier this month, he noted that the problem with making people create groups of friends manually is that “almost no one wants to make lists.” Facebook is taking a social approach to solving this problem by letting your friends add you to groups themselves. Realtime search startup Wowd is taking an algorithmic approach to the same problem with a new feature rolling out today called SmartFeeds.

Wowd is a peer-to-peer search engine that ranks sites based on how often Wowd members actually visit them. If you connect it to your Facebook account, it creates a social tab which allows you to search your personal Facebook feed and automatically blocks friend spam (all those automated messages on Facebook every time someone grows some corn on FarmVille). It also allows you to create custom feeds, which are basically friend lists you create yourself.

With SmartFeeds, Wowd now creates custom feeds on your behalf by looking at all of your friends, and clustering them together based on communication patterns between them. Your family members might show u in one feed, your co-workers in another, and your college friends in a third. Each SmartFeed also shows a tag-cloud of hot topics being discussed by that group (click on a hot topic such as “venture capital” or “Benoit Mandelbrot” and you’ll see all the messages in your feed that match those terms).

For each SmartFeed, you can see which friends are in each one and edit out names that don’t belong. You still have to go in and rename the feed to something that makes sense (the default is a list of the names in that SmartFeed). These SmartFeeds could use a little more automation, and perhaps some keywords to help you figure out why these people are clustered together. But it does a pretty impressive job of putting together lists that match up pretty closely to different groups of real-world friends and acquaintances. For me, it created SmartFeeds of people in Silicon Valley, TechCrunch co-workers, and folks I used to work with at my previous job. Beyond that, it wasn’t really clear to me why some of the other people were grouped together in different SmartFeeds, which seemed to overlap quit a bit.

Something like this which automatically suggests groupings based on communication patterns would make it easier for people to create Facebook Groups. (As soon as the APIs allow it, Wowd plans on making it possible to turn SmartFeeds and other custom feeds into group son Facebook itself). This feature would be much more useful on Facebook itself. However, Wowd plans to add Twitter and LinkedIn streams soon as well, and eventually will build these SmartFeeds into iPhone and iPad apps.