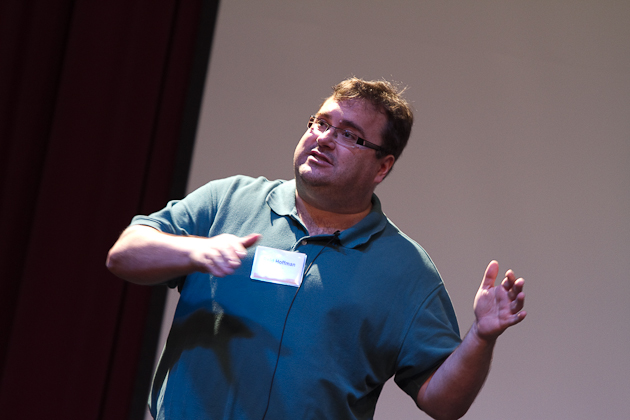 Oftentimes when you hear a startup CEO speak about their competitors, there’s a lot of talk about “validation of the market” and how there’s room for multiple winners. That may be true in some cases, but competition can hamper you in ways you may not immediately expect — and winning involves more than just building a superior product. That was one of the takeaway messages from LinkedIn founder Reid Hoffman, who gave an excellent talk at today’s Y Combinator Startup School.

Hoffman says that when he’s looking at startups, he often encounters entrepreneurs who think their product will be immensely useful once it gains traction. Unfortunately they oftentimes fail to put enough thinking into how they’re going to get from zero users to that critical mass that turns their product into something that people actually want to use. And that can be lethal, because getting traction is no given.

Hoffman touched on a point that was raised earlier during today’s event: it’s cheaper than ever to start a company, because you can tap into cloud services like AWS instead of having to build out your own infrastructure with a significant capital investment. But that has the downside of meaning that there are many hundreds and thousands more sites being created than there used to be, which means there’s more noise than ever.

Hoffman says that people go to around seven sites, give our take two, on a regular basis. In order for your site to succeed you need to break through the noise, and maybe even displace one of these mainstay sites. And therein lies the big problem: you don’t really have to worry about Google or Microsoft doing exactly what you’re doing (they probably won’t). Rather, you need to worry about rising above a whole “zone” of competitors.

Even if your product is superior to the others, consumers are usually going to use the product they stumble across first. In other words, even if your competition is completely mediocre, they’re still making your progress that much slower because you’re vying for the same customers, investors, and press. He says that one of the things that helped make LinkedIn successful was that there simply wasn’t much competition when he founded the company back in 2003.

Hoffman also talked about some of the pivots he’s been through during his time as an executive at PayPal and later at LinkedIn. He subscribes to the “fail fast” mantra — you need to ship your product as soon as you can, and if you’re not embarrassed by the first product you launch, you’ve waiting too long.

He recalled one relevant anecdote to this theory: just before LinkedIn was due to launch, his team of engineers said that they had to wait until they could implement a “contact finder” that would help users hone in on the kind of people they wanted to connect with. Hoffman asked his team if it would be possible to wait and implement this after the launch. The answer was yes, so Hoffman said to launch as planned, and that they’d implement the Contact Finder as soon as possible if it was clear that users wanted it. Seven years later, LinkedIn has yet to launch the feature — it simply isn’t needed.