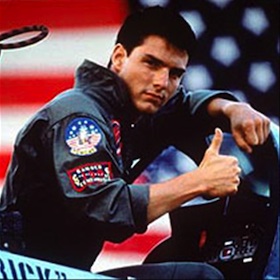 Of all the movies made in the 1980s, Top Gun is definitely one of the best. It has everything you need in a movie: California, drinking, jets, tragedy, Kenny Loggins, cheesy one-liners, and, of course, volleyball. And it’s about to take flight once again.

Yes, just like another 80s classic, Wall Street, the products/director behind the project are said to be prepping for a sequel (hopefully one better than the Wall Street sequel which was meh). And sources tell NYMAG.com’s Vulture that screenwriter Christopher McQuarrie (of The Usual Suspects fame) is going to work Tom Cruise’s iconic Maverick character into the movie, in a lesser role.

So what does any of this have to do with tech? Well, admittedly, not a lot. But it is interesting why this sequel is getting made. Apparently, it’s basically due to the son of Oracle founder, ultra-billionaire, and sometimes HP antagonist, Larry Ellison.

27-year-old David Ellison, who was all of 3 when Top Gun came out in 1986 (not that I can talk, I was 4), is apparently also a huge fan of the film. And not just that. He’s also a film producer and a pilot as well. And he makes movies about flying. Oh, and he just happend to raise $350 million dollars from JPMorganChase to co-finance a slate of films with Paramount — the movie studio behind Top Gun. The first of those films? Tom Cruise’s Mission: Impossible 4.

Yep, it’s like a match made in Top Gun sequel heaven.

To recap: Man obsessed with Top Gun. Son of the sixth-richest man in the world. Movie producer. Stunt pilot. Helping out Paramount. Helping out Tom Cruise. Yeah, this movie is so getting made.