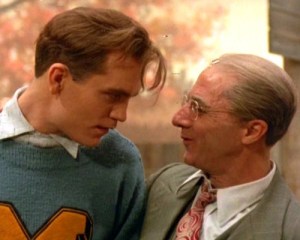 Maybe it’s time for the great salesman to hang it up. Microsoft CEO Steve Ballmer spoke at a computer science school this week and was asked in a roundabout way, why someone would want to work at Microsoft when there are so many more exciting companies out there, like, say  Apple.

Ballmer tap dances for four minutes, the moderator hops in and notes that one-third of the school’s graduates go to Microsoft, which isn’t that surprising given this talk was held at the University of Washington and Microsoft is by far the biggest tech company in the state. That’s like auto companies saying because a lot of people in Detroit have jobs with them, they’re still on the cutting edge.

Finally Ballmer gets to the answer of why Microsoft is exciting: Windows…and….phones. He doesn’t even sound like he’s convincing himself. Let’s hope for the sake of shareholders the pitch to customers is as dynamic as it used to be. [Drinking game bonus: Drink every time he says “Best and the Brightest”]