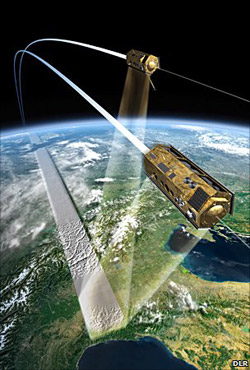 The satellites were launched back in 2007, and the images they produce will be used for any number of things. The BBC lists airline navigation and better figuring out what areas could be at risk for a flood.

The map the satellites produce will be completed by 2014.

That is Italy on the left, correct? I’m almost positive I can see the San Siro.