AppRats, which demo’d at i/o Ventures Demo Day, has taken a gamble on the fact that the next iteration of celebrity will come from YouTube (“You need a different set of skill sets for the Internet” says founder Charlene Kuperstein) and has banked itself on engaging fans of those celebrities on Facebook platform, trying to provide individuals with over 25,000 YouTube subscribers with custom branded platforms in order to target their viewership market.

“There is a pattern that every time a new form of media is born, a completely different type of celebrity arises. Now it’s 2010, and as history repeats itself, there must exist celebrities who are perfectly adapted to thrive on the Internet.”

Except fans don’t usually spend a lot of time on YouTube, so Kuperstein and Moriarty build various popular YouTubers free apps so they can market their YouTube channels though Facebook, taking advantage of that platform’s huge user base and time spent ratio..

As an example of the market’s viability, Kuperstein and co-founder Ryan Moriarty bring up the example of MysteryGuitarMan (video above), a YouTube celebrity who has garnered over 150 million video views and has the potential to bring in over one million dollars in revenue if he continues at his current growth rate.

Currently AppRats has signed up MysteryGuitarMan along with 50 of the the top 100 most trafficking YouTube celebrities, and makes money through ad revenue share, hoping to expand to other models and platforms soon. 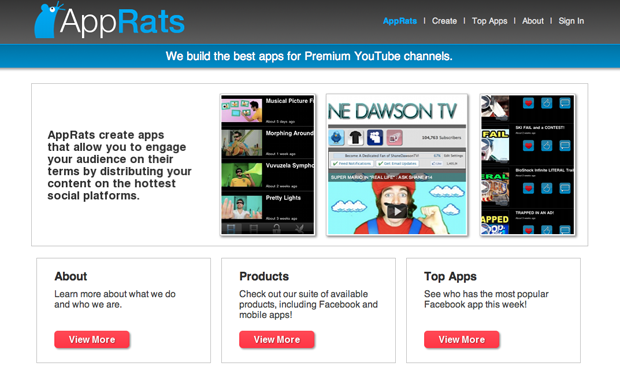