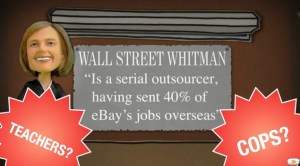 I mean, I admit it’s catchy.

…which depicts the former eBay CEO as a Jib-Jab-esque bobble head doll.

In fact, since hearing it for the first time last week, I haven’t been able to get the tune out of my head. And isn’t that the cornerstone of a decent ad? A catchy tune? Particularly, as in this case, a catchy tune which takes a bucket full of raw “facts” and transforms them, through song, into a message which prompts even the most dunderheaded punter into outrage that a) Meg Whitman is very wealthy, b) during her time at eBay, the company outsourced two out of five jobs overseas c) something about using eminent domain to buy her neighbour’s house d) she really is very, very wealthy.

In that regard, “Meg For Meg” is a triumph, in the same way that Tom Lehrer’s proposed theme song for a movie based on the story of Oedipus Rex is a triumph.

The difference is that Lehrer was kidding, and his audience was in on the gag, elitists that they were. In the case of the CCPOA’s Whitman ad, neither is true.

And that’s the first of the spot’s three problems: putting aside the question of whether negative ads work at all, by attacking Whitman so personally, the CCPOA achieves the opposite of what they set out to do. They present themselves as a bunch of bullies, making the audience feel sorry for Meg Whiman. Which is no mean feat considering the CCPOA is a union representing 30,000 hard-working correctional peace officers and she’s a Republican billionaire.

The second problem with the spot is a purely artistic one: the catchy memorable part of the song – the chorus – is not the core message of the attack. Instead, the core message is hidden in the verse…

“Well Meg’s got a house in pretty Telluride,
And she wants to keep her view form each and every side,
She couldn’t buy out her neighbors so she figured out a plan.
Use eminent domain to gobble up the land! “

The catchy memorable part is a cutesy bobble head doll (which makes Whitman look more like Marissa Mayer) and the refrain “Meg, Meg, Meg.” I don’t have a vote in this race, but if I did, thanks to that song I’d be entering the voting booth with cutesy feelings towards Whitman and her name stuck in my head. “Meg, Meg, Meg,” I’d hum as I put my cross next to the candidate nearest the front of my mind. #AttackAdFail, as the kids would have it said.

But the third thing wrong with the ad is the one that, depressingly, is the one least likely to matter to voters: its whole message is breathtakingly disingenuous.

“Since she moved in she’s been the head of eBay,
And in that short time a lot of job’s she’s sent away,
Two out of five eBay jobs are overseas,
Wonder if she’ll outsource all the state employees? “

This, along with the fact that Meg Whitman is (lest we forget) very wealthy, is why – we’re told – she is unsuitable for public office. Whitman sent American jobs overseas as head of eBay, so what’s to stop her doing the same to state employees? To underscore the point, the video flashes up the words “Teachers?” “Cops?” (Presumably “correctional peace officers?” wouldn’t fit in the little animated stars.)

Why yes, CCPOA, as CEO of a public company that employs thousands of programmers and customer service employees, Whitman chose to locate many of those jobs in countries where labour costs are lower. And so of course when citizens of Whitman’s California call 911 it’s likely that the call will be routed to a call center worker in Bangalore who will immediately dispatch a plane full of Mumbai’s finest constables on the 25 hour flight to San Francisco. And heaven help the school bus drivers who will have to make the opposite journey every day to ferry Californian kids to their new classrooms in downtown Delhi.

The fact is, whether you agree with her politics or not, Meg Whitman’s decisions as the head of eBay have little to no bearing on how she would behave in public office. Or if they do, then many of the signs seem to be positive. eBay is a public company and as such Whitman’s move to cut staffing costs and maximise shareholder value wasn’t so much a decision, as a duty. As Scott Devitt, an analyst at Stifel Nicolaus & Co told CNET, “Meg Whitman was a phenomenal success running eBay for a decade… she has overseen an 88-times increase in revenue and a more than 1300 percent return in stock since the IPO.” She also, it’s always worth mentioning, became very wealthy. As a public servant, Whitman’s duties won’t be to shareholders, but to the public so it’s at least possible that she’ll sho the same dedication to duty there as she did in private office.

Not only is the CCPOA’s attack ad using an apples to oranges comparison, but worse still it’s setting a dangerous precedent for other business leaders considering public office.

On the face of it, business leaders have many of the qualities that we need in government: communication skills, an obsession with managing costs, and (to mix a metaphor or three) an ability to wrangle countless conflicting interests into a single, well-oiled machine. But if the CCPOA has its way, and voters start seeing those traits as worthy of attack, then the voters of California – and America – might very quickly find themselves with no qualified candidate to vote for. “California Governor: only impoverished candidates with no successful management experience may apply.”