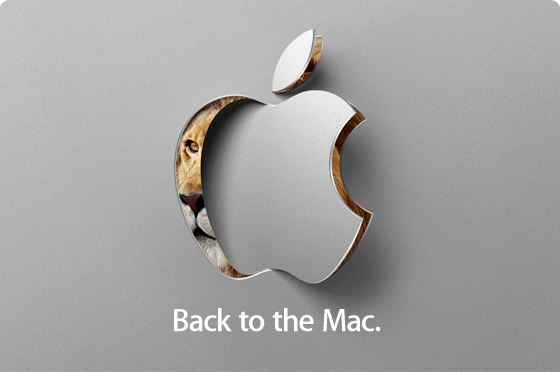 As you’re well aware by now, this morning, Apple sent out invites to an event taking place in one week at their headquarters in Cupertino, CA. The invite reads, “Back to the Mac.” and asks those invited to “Come see what’s new for the Mac on October 20, including a sneak peek of the next major version of Mac OS X.” But the most interesting thing about the invite has to be the picture. It’s an Apple logo cut out a sheet of metal that has been slightly turned to reveal what’s behind the sheet: a lion.

On the surface, that nickname could easily be discounted as just a random big cat Apple hasn’t used yet. But this is Apple, they don’t do “random”. There are a few big cats left that Apple could have chosen from — Lynx, Cougar (har har), and even Clouded Leopard come to mind — but they’re going with Lion, the kind of the jungle. To me, this means they intend this version of OS X to be big.

You might think that’s obvious, but consider OS X 10.6, which they named “Snow Leopard” — an extension of 10.5 “Leopard” — rather than giving it it’s own completely new big cat name. (Technically, snow leopards are from a different genus than leopards, but most people don’t realize that.) And in fact, Snow Leopard wasn’t all that different from Leopard other than it was faster and had a much smaller footprint. And Apple wasn’t afraid to say as much when they unveiled the OS in June 2009.

But OS X 10.7 Lion could be a completely revamped OS X, including a long-awaited interface change. The computing world is shifting into the age of mobile, and iOS is now seen as Apple’s major operating system. Perhaps OS X Lion will represent the beginning of a unification between OS X and iOS. And if Apple is giving it the Lion moniker, which they won’t be able to top, perhaps they mean this to be last version of OS X? (Though they do say “next” version of Mac OS X and not “last”.)

As we noted back in June, the footprint of OS X 10.7 is already out there. We see it everyday in the TechCrunch logs, undoubtedly from Apple’s HQ where it’s being worked on. In the past few months, the number of visits by machines running OS X 10.7 has continued to increase.