Gaming startup PlayFirst has raised $9.2 million to expand its casual gaming experience into mobile and social, raising its total funding to $31 million. The Series C round was split into $5.2 million of VC funding from existing investors Mayfield Fund, Trinity Partners, and Rustic Canyon ventures and $4 million in debt financing from Comerica bank.

PlayFirst was founded in 2004 and includes such titles as Diner Dash, Cooking Dash, Wedding Dash, as well as Chocolatier and Dream Chronicles, with the “Dash” triumvirate of games clocking in over 100 million play sessions to date. The company plans on using the financing to bolster its social and mobile gaming thrust, like just about everyone else in the entire sector is doing at the moment.

Along with the financing, PlayFirst also announced that former PlaySpan Chief Marketing Officer and Harvard MBA Eric Hartness will join the San Francisco based startup as general manager of social games, Loomia’s Matt Levy will be coming on as Chief Architect and Playdom’s Lars Berg will be joining as senior product manager.

“We will continue to aggressively optimize the PlayFirst brands that consumers love, like Diner Dash, to social and mobile platforms and look for growth through partnerships and potential acquisitions.” 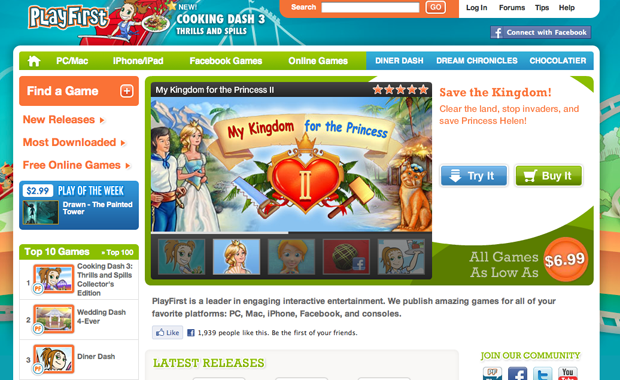