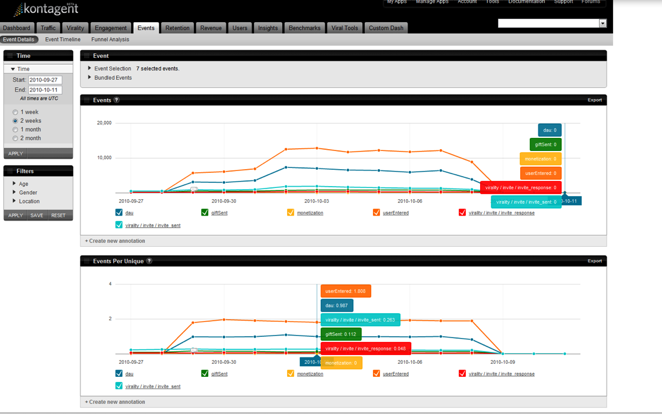 Kontagent, an fbFund winner and social analytics platform, is launching a new version of its social analytics suite, complete with social funnels, social event tracking and other features. Kontagent is now tracking over 70 million monthly active users, and has reached over 150 million social network users over the past two years.

Using a unique social identifier, Kontagent’s Social Event Tracking system will define and track specific, detailed user interaction events, allowing developers to adjust games and applications to fit the needs of users to engage with the application the most.

The startup, which has raised $6 million, to date, also extends its analytics platform to iPhone and web applications using Facebook Connect.

Kontagent’s founder Albert Lai says that the platform is increasingly being used by social game developers, and the new version offers tools that fit nicely with evaluating data from game mechanics, including virtual goods, and more. While Lai declined to name all of his clients, he says that “most of world’s largest game publishers” are using Kontagent.