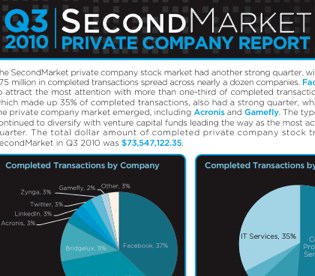 Private company stock trading startup SecondMarket just released their Q3 transaction report. The highlight – Facebook continues to dominate with 37% of total transactions, although SecondMarket doesn’t break out the total size of those transactions. Nearly $75 million worth of stock flowed through them in the last three months, though (up from $51 million in Q2):

GlobalLogic, which made up 35% of completed transactions, also had a strong quarter, while new names in the private company market emerged, including Acronis and Gamefly. The types of buyers also continued to diversify with venture capital funds leading the way as the most active buyers in the quarter. The total dollar amount of completed private company stock transactions* on SecondMarket in Q3 2010 was $73,547,122.35.

SecondMarket also tracks buy side interest, which may or may not result in closed transactions. Facebook dominates that category, too, with 34.1% of all buy side interest. Twitter is a distant second with 5.8%. LinkedIn, Zynga, Craigslist, Yelp, Digg, Kayak, Etsy and SecondMarket itself round out the top ten list. See below for image.

The companies with the fastest growing buy side demand include Groupon (up 63%), Bloom Energy, Pandora, Trulia and Zipcar.

The full report is available here in pdf. 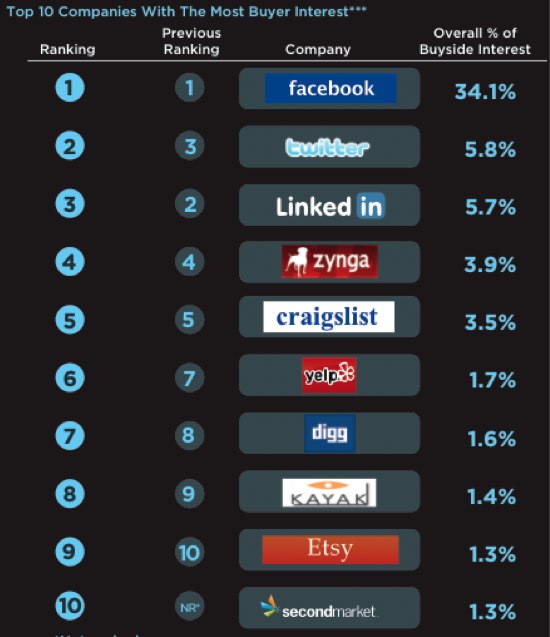