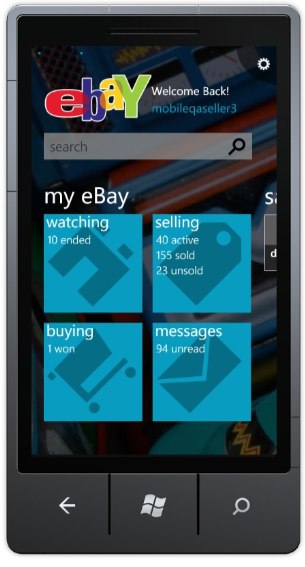 With this week’s release of Microsoft’s Windows Phone 7, eBay is taking the opportunity to roll out its flagship app for the platform. eBay’s Microsoft-friendly version is loaded with a lot of the basic functionality available on the iPhone and Android apps but you’ll notice a few new options and a dramatically different aesthetic (reflecting the new Windows Phone 7 environment).

Not surprisingly, you’ll be able to search, bid and “buy now” goods in the auction marketplace and opt for push notifications to help you keep track of your bids. What’s different in the new app? For the first time, eBay will let users save searches and create to-do lists to help manage transactions and payments. The app will also prioritize the list for you to keep the most time-sensitive actions at the top.

While those features will be a plus for die-hard eBay fanatics, for the average user, the real difference is in the design. According to Steve Yankovich, eBay’s VP of mobile and platform business solutions, the company was eager to explore the Windows Phone 7 design framework and draw inspiration from Metro (the name of the platform’s design system).

The influences here are obvious, a relatively clean user interface, colored blocks, a default black or dark background that is complemented by text in white or bright colors. If you’ve looked at some earlier shots of Windows Phone 7, there’s a clear, intentional continuity between this app and its OS environment. 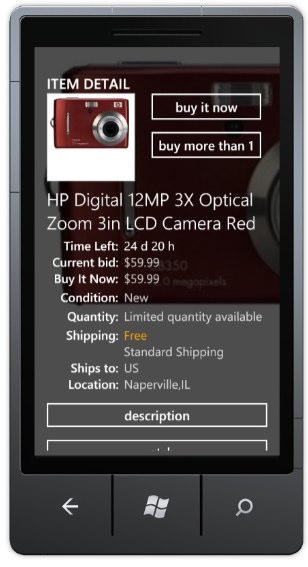 Furthermore, unlike the iPhone or Android version, you’ll also have the option to set unique background themes and color accents. I’m not sure how that augments the bidding experience, but Yankovich says that was a feature many mobile users were requesting.

Admittedly, I’m not a heavy eBay mobile app user. I’ve never felt compelled to bid for an item on the go, nor have I yearned to customize my eBay app wallpaper— but mobile is a booming business for eBay, so I don’t blame them for paying close attention to the consumer and test driving features on new platforms (Yankovich says, depending on feedback, some Microsoft-only features like saved searches may find their way to other platforms soon).

According to eBay, mobile transaction occurs at least every second and the mobile division’s gross merchandise value (the total value of the transactions, not eBay’s profits) is on track to hit $1.5 billion this year.

That’s still a far cry from eBay’s main web portal, which racks up roughly $60 B in GMV per year, but given the explosive growth in smartphone and tablet adoption, eBay doesn’t have the luxury to phone this one in (even if it is on Windows Phone 7…). 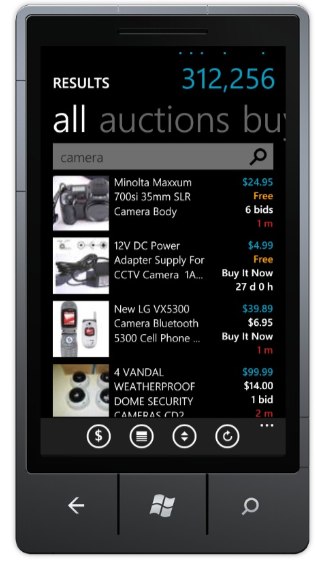