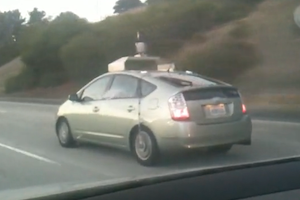 In November 2009, Ben Tseitlin was driving along on the 280 highway between San Francisco and Palo Alto when he noticed something weird. There was a Toyota Prius next to him with a weird spolier-like thing on the roof. And on top of that was some sort of spinning contraption. It was weird enough that Tseitlin decided to take a video of it and posted it to his Facebook page, guessing it was sort of test wind-powered Prius. Little did Ben know at the time, it was actually something much more.

What Tseitlin captured, of course, was the Google self-driving car. The secret project, which Google revealed for the first time today, is a combination of different technologies developed by Google that will allow a car to drive itself — yes, even on the highway. Google has disclosed that they’ve been testing these cars “recently“, but they’ve clearly been testing them for longer than that, as Tseitlin’s video proves. The fact that these specially-equipped Priuses (and one Audi TT) have racked up over 140,000 miles (1,000 of while have been completely human-free) on the road, suggests a longer cycle of testing as well.

One of the most interesting aspects of this whole project is that local authorities were fine with Google road-testing these cars. “We’ve briefed local police on our work,” Google noted today and said that human beings are always present in the driver’s seat when the cars are on the road just in case a manual override is needed. The only accident over all these months involved someone else rear-ending one of the cars.

Tseitlin tells us that he’s actually seen the cars around a few other places as well in the past several months. A commenter on his Facebook post notes the same thing.

Google’s secret project has been driving next to many of us all these months and we never ever realized it. That won’t be the case anymore. Watch Tseitlin’s video below.

Update: And none other than Robert Scoble caught the car on video in January 2010 — but he assumed it was the new Street View car. His comment on the video page is funny:

They must be testing the latest Mapping car a lot lately. Seems I see them on almost every trip. I’m not sure what company they work for, I’ve always assumed Google but I see these cars quite frequently in Silicon Valley. This time I had my HD camera ready. Note that there’s two cameras on top: one that looks like it’s recording video (the black thing on top) and one that’s recording stills (the rotating camera). Also note that they didn’t like me shooting video, when they noticed me they slowed down quickly.

There was a reason they didn’t like him shooting that footage. Also – eyes on the damn road, Robert! This is exactly why we need these cars.