I know we’re not technically in a recession and Americans love their electronics— especially those that start with the letter “i”— but as a whole, electronic retailers need a reality check, or a swift kick to the gut.

On Wednesday, CrunchGear’s Devin Coldewey and I dropped by two product announcements, one for Cisco’s purportedly consumer-friendly ūmi and Logitech’s Google TV accessory round-up. It was a long parade of flashy products with decent specs and thought-provoking price tags. As I mentioned in an earlier post, ūmi truly does bring high-quality telepresence into the home (assuming you have a solid connection) but it will cost you $599.99 for the hardware and $25 a month— or $300 more per year— just to use the service. What exactly Cisco is providing to justify that $25 a month (besides extra padding for its bottom line) is beyond me.

Even other executives in the industry think $600 for consumer video calling is pushing it, especially when you consider that your target demo has been trained to equate video calling with “free” thanks to services like Skype and Google video chat.

When I asked Logitech’s CEO, Jerry Quindlen, what he thought about Cisco’s ūmi price point for TC TV, the polite executive merely said, “I don’t think anything that’s too expensive or isn’t easy to use is going to be successful, doesn’t matter who it’s from…if that’s where it [ūmi] is, and there’s a monthly fee, you know, that might be a tough sell in this economy.”

Of course, I whole heartedly agree with Quindlen but I can’t resist laying down that tired, if not apropo, idiom: pot, kettle black. To wrap up his presentation on Wednesday, Quindlen displayed a slide with Logitech’s entire mini-eco-system for Google TV: $299.99 for the Revue, the unit’s centerpiece, $129.99 for a mini-controller and $149.99 for a mountable camera for video chatting (requires the Revue for use). All told that’s $579.97 before taxes— notably less than Cisco’s one-trick-pony video chat solution but more expensive than many LCD and plasma screens on the market and roughly 6x the cost of Roku or Apple TV.

Logitech’s bundle may be the first set top solution for Google TV but it certainly won’t be the last or the least expensive. To put it bluntly, $600 for a set top bundle seems to be a tough sell in this economy.

See full video with Quindlen above,  interestingly, he mentions that the next wave of products will include gaming solutions for Google TV. 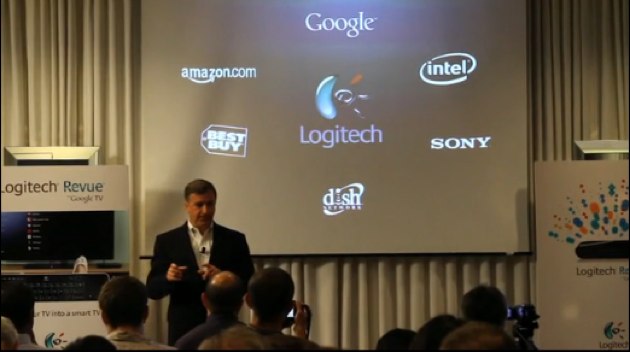