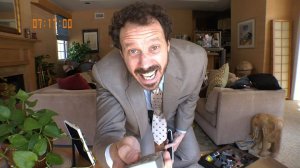 “Hello, Adam Rifkin? This is Adam Rifkin,” Adam Rifkin said. To his surprise, Valley Adam Rifkin knew who Hollywood Adam Rifkin was and they had a nice chat about how the Web was confusing identity and connecting people who may have never met before that had random things in common. I can relate to the weirdness, having just discovered there’s another Sarah Lacy working at a VC firm in Silicon Valley. I felt like Milhouse in the Simpsons episode when he met his Shelbyville doppleganger also named Milhouse. “So this is what it sounds like when doves cry.”

Fifteen years later, the two Adams lives have collided again thanks to the Internet, which has also collided their respective Hollywood and Valley worlds. Hollywood Rifkin asked for Valley Rifkin’s help with a series he developed for Showtime called LOOK. It is the followup to a movie that Hollywood Rifkin made three years ago. The movie explored the idea that the average person is recorded on surveillance cameras 200 times a day, weaving together four fictional story lines, told just via surveillance video. The series is about the evolution of our voyeuristic society. As Hollywood Rifkin put it sitting in a San Francisco hotel room with Valley Rifkin, “Before it was merely big brother, now it’s little brother too.” In fact, usually it’s no brother at all– it’s us uploaded endless video about ourselves.

The Rifkins are trying to explore the everyone-is-a-star-of-their-own-movie phenomenon, without making a value judgment about whether our eroded privacy is a good thing or bad thing. That’s not easy, as there are powerful examples of both view. “We’ve seen London bombers get arrested because of surveillance footage and we’ve seen abuses on the other side, most recently the tragic story of the Rutgers freshmen,” Hollywood Rifkin said. “I just wanted to present the facts. We’re all being watched.” Appropriately enough, there’s a premiere of the show at Twitter’s headquarters tonight. (Plenty of Adam Rifkins will be in attendance.)

LOOK is completely scripted, but it’s shot solely over webcams, cell phone video and surveillance cameras– flipping the traditionally slick, movie-style look of a Showtime series on its head. The show is both high-tech and low-tech at the same time. Hollywood Rifkin eschews any kind of “if-you-like-Weeds-you’ll-love-Look!” style sound bite, saying it’s unlike most stuff on TV. That could be good or bad, but at least it’ll be different.

It’s this side of how technology is changing Hollywood– the democratization of the industry through social media– that excites both Rifkins more than the Avatar-kind of ways technology is changing Hollywood. Put another way, LOOK is more about how social media is deconstructing the medium, rather than how sophisticated software and hardware is adding more illusion to it. Hollywood Rifkin spent his childhood making movies on his dad’s Super 8 camera, stringing up a sheet and showing them to the neighborhood in his backyard to maybe twenty people. His mind boggles at the idea of a kid today doing the same thing with a Flip and posting them on YouTube. “I could have had fans in Japan,” he says. He views it as a time as transformative as the early days of silent films when Hollywood pioneers were making the industry up as they went along.

Of course, there are plenty of people who think more cameras and more YouTube just equals more noise, not more undiscovered talent. “Those people have sour grapes,” Hollywood Rifkin barks. He points to the film “Paranormal Activity,” which was shot on a budget of a few thousand dollars and made $200 million. It’s not that technology will make anyone with a video camera talented, but it can allow a talented person ways to get his or her work produced, marketed and seen.

LOOK premieres on Showtime this Sunday night at midnight. There’s a trailer below.