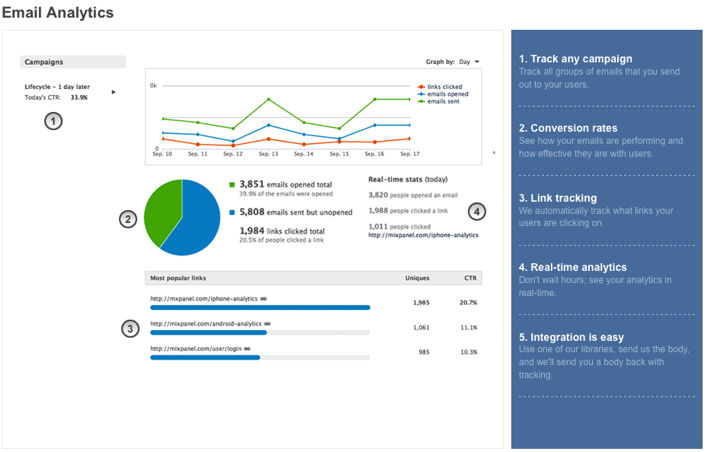 Mixpanel, an analytics-focused startup whose backers include Y Combinator, Michael Birch, and Max Levchin, is getting into email analytics today with the launch of a new feature that allow publishers to track a variety of metrics for email correspondence.

The startup, which now tracks over 1 billion actions per month, allow developers to track a variety of user actions, including the number of pages a user has viewed, iPhone app analytics, interactions on Facebook apps.

With the new email offering, Mixpanel is allowing companies who send large amounts of email correspondence (i.e. think LinkedIn, Facebook, Groupon) to track analytics around the effectiveness of these emails. Developers will be able to track click through rates for links within an email, the rate at which emails are opened, and will soon allow users to conduct A/B testing for emails. So developers will be able to test out two versions of an email and see which one receives the most interactions. Mixpanel promises realtime updates and says that stats show up in seconds.

Mixpanel’s co-founder Suhail Doshi says that Posterous, Bebo, Listia and a few others are currently using the tool, with Bebo already analyzing half a million emails over the past few weeks.