Remember back in 2008, when the airlines told us that they needed to add extra charges and fees because of rising fuel prices? Please tell me you didn’t think when fuel prices went down they’d drop those fees? It all comes down to profit, and we can definitely see that given what happened to Scott Jordan from ScottEVest. Scott makes a line of travel clothing, and in recent months has been advertising the fact that it’s easier to load up your jacket then it is to bring a carry-on. I agree, but apparently Delta doesn’t. They actually refused to run Scott’s ad, despite the fact that they charge (quite handsomely I assume) for those ads in the Delta Sky Magazine.

So since Delta wasn’t willing to run Scott’s ad, we’ll show you his ad here. And also recommend, again, that you check out Scott’s clothing line. I reviewed his Evolution travel jacket earlier this year, and really liked it, but it was discontinued. Scott recently brought the Evolution line back, and it’s been improved. It’s also perfect for sticking it to Delta. I know I’ll be wearing mine (and have it loaded up with my various gadgets) when I fly next week. 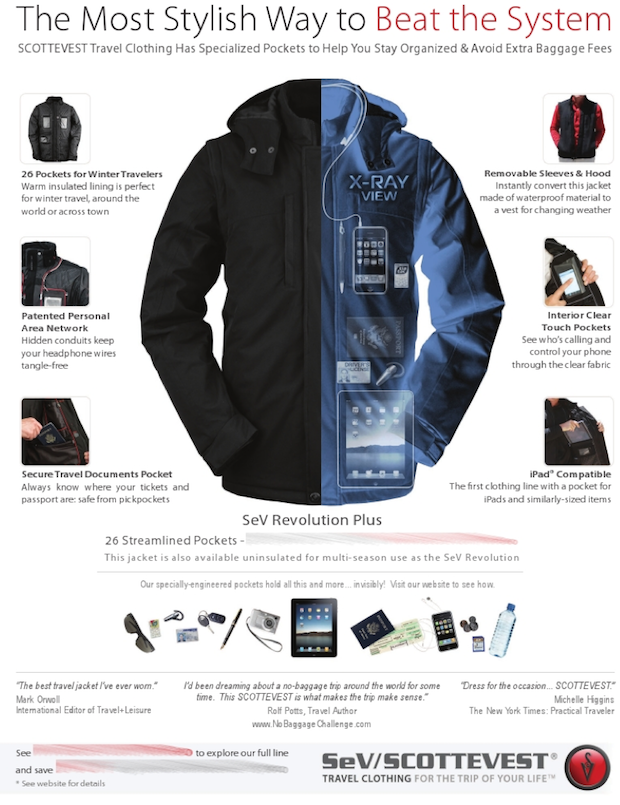