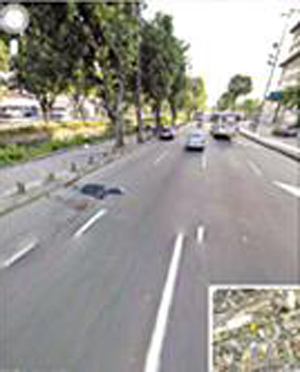 Brazil, which already has a relatively high proportion of Google data removal requests, is experiencing some stumbles relating to yesterday’s launch of Google Street View, including the discovery of not one but two images of dead bodies, specifically the photo to the left snapped at Avenida Presidente Vargas in Rio De Janeiro and another one reportedly captured at Belo Horizonte, Minas Gerais.

According to G1, Google has removed the Brazilian images and instructed other people who find inappropriate material on Street View to report it to Google through the “Report a Problem” link at the bottom of the page.

Perhaps one explanation of this disturbing issue is Brazil’s high murder rate, at 25.2 intentional homicides per 100,000 citizens yearly.

Prior to this the most notable “corpse on street view” story took place in the UK and had a happy ending, with the body in question belonging to a little girl who was playing a prank.

You can view a closeup of the image here. [Warning, not for the faint of heart]