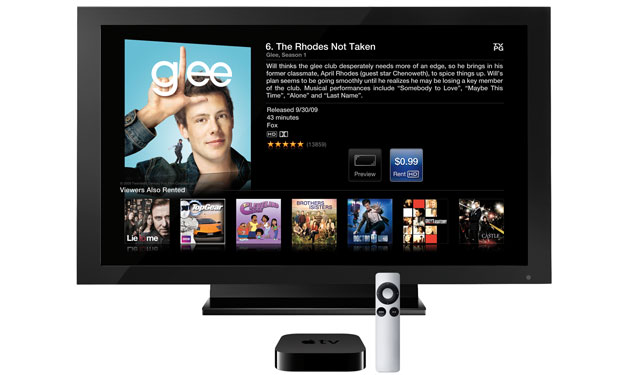 The new Apple TV is here. Fedex men are dropping them off everywhere and early reviews are quickly popping up. However, we’re not ones to publish a review after only clocking a couple quick hours with the device. It’s not fair to you or the product. Some outlets seemed to get the device a bit early and we’ve rounded up five of the best we could find. Spoiler: People like it.

Apple has hit a home run with AirPlay, which enables streaming from iOS devices to Apple TV. Downloading a video to your iPad, iPhone 4, or iPod touch and streaming it on your Apple TV will be a reality with the forthcoming iOS 4.2 update. As long as your devices are all on the same Wi-Fi network, your Apple TV can access whatever you’ve rented after some minimal set-up—and friends using their own iTunes accounts can also stream to your Apple TV if they’re on your Wi-Fi network. Without a doubt, this is the single greatest new feature of Apple TV.

That said, the feature is not available yet—you’ll have to wait until November when iOS 4.2 is pushed out.

The biggest new thing about the Apple TV is the feature my mom will like the most: If you’re a Netflix subscriber you can watch movies instantly on it. Every web-enabled TV component can do that these days, including game consoles like the Xbox 360 and Sony PS3 and dedicated boxes from Roku and Boxee, so it’s an expected feature. But on the new Apple TV it’s fast, easy to set up, and easier for consumers like my mom to appreciate.

Mom’s surely not buying an Xbox for Netflix streaming, and she — like you, I’m guessing — probably thinks Roku sounds like a sushi dish.

When streaming 720p content (particularly new movies) the clarity of video was impressive. There was certainly some very minor compression artifacting, but far far less than you would see on HD video on demand from your cable provider, and considerably less than with Amazon’s HD streaming. As you can see in the comparison photo, HD content from Amazon on Roku’s new XDS looks noticeably more blocky than the cleaner, dithered content coming to Apple’s new box. This was true for SD content as well — across the board, the Apple TV streaming video looked smoother, crisper, and clearer than its nearest competitors. The video quality obviously doesn’t match up to the richness of full 1080p Blu-ray discs, but it looks damn good.

The new Apple TV is a spectacular hardware upgrade from the old model. The device is easy to use, and excels at three tasks: playing back content from local iTunes computers, renting iTunes content over the Internet, and playing back Netflix streams. But it’s somewhat hampered by a limited selection of TV shows available for rent, and locked out of the larger catalog of items available for purchase. And until Apple expands the Apple TV’s capabilities, either by adding support for other Internet streaming services or by opening the device to third-party development, the product is locked in to only a few content sources.

The bottom line is that the new Apple TV is easy to use and incredibly convenient for disposable content consumption. Most movies are in HD (720p) with Dolby 5.1 surround and TV show rentals are just a bonus. At $99, you have very little reason not to purchase one. It’s tiny (0.9×3.9×3.9 inches), weighs 0.6 pounds and can easily be tucked away into your entertainment system. The A4 processor chip certainly helps, too. Load times were acceptable and navigating menus were a breeze. According to Apple it sucks very little energy – less than a nightlight, I’m told. It’s no longer a hobby and a must-have for your growing Apple eco-system.