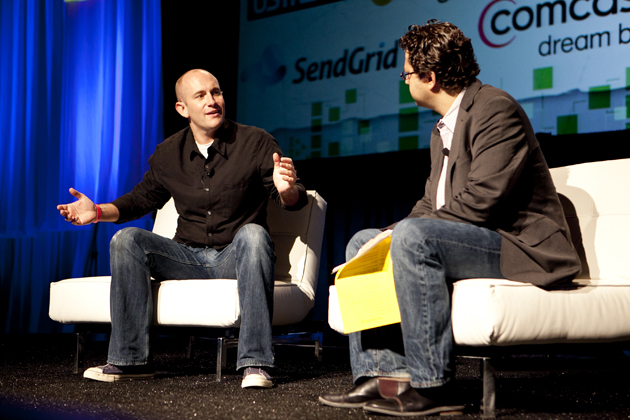 Vevo CEO Rio Caraeff took the stage today at TechCrunch Disrupt to talk about how Vevo, like a Hulu for music launched in December 2009, is now the third largest source for video on the web. Vevo, whose core philosophy is that the Internet is about choice, now receives 49 million unique video viewers a month, with 500 million views in the US and 1.4 billion around the world.

A partnership between Universal Music Group, Sony Music Entertainment and the Abu Dhabi Media company, Vevo allows users to create personal music video playlists from over 30,000 videos and 8,00 artists through a syndication deal with YouTube. The company is an attempt to extract value from music video content specifically, as bands are increasingly made or broken online. Vevo is focused on two goals; bring meaningful revenue but to the rights owners and delivering a large audience.

“We’ve proven that we can aggregate a large audience and proven that music is valuable to advertisers. If people are passionate than we can monetize that audience.”

According to Caraeff, Vevo is currently seeing tens of million in revenue, through sponsorships and advertising, with more than 50% of that revenue going back to the labels and artists. Attempting to “restore the luster of video advertising,” Vevo’s advertising rate is comparable to broadcast, with CPMs north of $20.

Caraeff insists that the not yet profitable Vevo is an “experiment on a grand scale.” It remains to be seen whether tech industries can work with tech companies raise value of music and generate more revenue than analog world. But, if there is a solution, some insight lies in the massive distribution systems that Vevo has currently built.