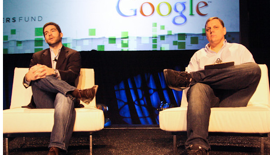 With 80 million members, LinkedIn is steadily growing as the go-to professional social network. And as the company reportedly readies for an IPO within the next year, all eyes are on LinkedIn to see if the company can scale. Today, Michael Arrington sat down with LinkedIn ‘s CEO Jeff Weiner, a former longtime employee at Yahoo, about plans for an IPO, future strategy plans, and more.

Weiner was mum about taking the company public, saying that an IPO is just one way that would allow LinkedIn to achieve long term goals. Weiner, who was formerly the Executive Vice President of Yahoo’s Network Division, did elaborate on his beliefs of where the internet is today and what the future potential of his former employer, Yahoo.

He believes that currently, there are three waves of disruption on the internet. The first was the portal, connecting users to other information on the web, which is something that Yahoo was able to play a key role in. The second wave involved search, which was clearly led by Google, whose algorithm was a key disrupter. But there isn’t as much of an element of serendipity in search. Which is where the third wave comes in-social. Weiner says that building networks with the ability to share relevant information and knowledge is a key way to show relevancy.

When Arrington asked Weiner what he thought of Yahoo CEO Carl Bart’z performance, Weiner said that it’s difficult to understand the challenges or restraints of a company unless you’ve been in the hot seat. But he added, Yahoo isn’t dead. Yahoo is in unique position, says Weiner, because they have access to all waves— a portal of information, search, and social relevancy. Yahoo is in a position to do for browsing what Google did for search, claims Weiner.

Perhaps that statement will help Yahoo figure out what it is?

Here is my backstage interview with Weiner: