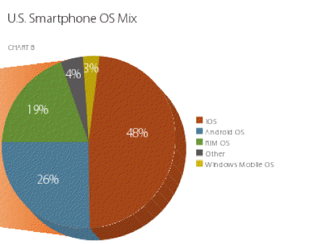 Mobile ad network Millennial Media is releasing its monthly mobile mix report today. According to Nielsen, Millennial’s ads reach 63 million of a total of 77 million mobile web users in the U.S., or 81% of the U.S. mobile web. In August, Android smartphone impression share increased 7% month-over-month, and now makes up 26% of the Millennial network. Apple, of course, took the top spot, with 48% of impressions on Millennial’s network, up 7% since July.

In terms of devices, Motorola jumped ahead of RIM to become the third largest device manufacturer on Millennial’s network for the first time, thanks largely to the popularity of the Motorola Droid device, which had a 9% impression share. In fact, Android devices represented six of the Top 20 Mobile Phones on the network. Smartphones accounted for 13 of the Top 20 Mobile phones and represented over 54% impression share in August.

For example, Millennial says 45% of BlackBerry users are Women, while there were 11 Million BlackBerry devices sold last quarter (115 million were sold globally).

As one of the largest mobile ad networks in the space, Millennial has been growing like gangbusters. Millennial is now planning to IPO next year, CEO Paul Paulieri told us last month. As competition heats up in the mobile advertising space, with iAd and Google’s AdMob all vying for a pice of a $1 billion market, it should be interesting to see how things play out in the space.