If you’ve had a guitar sitting in your closet collecting dust, now may be the perfect time to pick it up again and start learning some new tunes: Miso Music, an upcoming iPad application from Miso Media, looks like one of the niftiest guitar training applications I’ve seen. And it just won the People’s Choice Award at TechCrunch Disrupt, after receiving the most votes from conference attendees browsing the Disrupt Startup Alley.

The real meat of the application lies in its learning mode. First, you choose a song; Miso has licensed music from Sony/ATV, which gives them rights to include music from The Beatles, Justin Bieber, Carrie Underwood, and more. After picking a song, like the Beatles’ Black Bird, you’ll see a series of colorful dots scroll across the screen representing each note you’re supposed to play (this is called tablature, or tab for short, which is a simplified form of music notation often used for guitars). Tabs aren’t anything new. But Miso will actually listen to what you’re playing.

Every time you pluck a string, Miso will use its polyphonic note detection to hear what you’ve played — play the right note and the tab appearing on the screen will scroll a bit, which means you can keep playing continuously without having to turn the page. It’s quite slick. And while I’m sure there are other applications available for the PC with similar note detection, the fact that Miso is on the iPad makes it much more convenient (and the app looks very nice to boot).

Miso Music isn’t available just yet — you’ll have to wait two weeks or so until you’ll be able to buy it in the App Store — but once it goes live it will be free for a basic version. A pro application will be available for $2.99, which includes more virtual instruments. And songs will be sold as in-app purchases ranging from 99 cents to $2.99, with packs of songs available at a discount.

CC: I’ll definitely use it.

SV: How did you figure out a good way to teach people how to learn the guitar.

MM: My dad was a guitar and we both come from a musical background. There are a lot of features included that help users learn the skill.

LZ: You talked about subscription revenue for the software; are there other revenue streams?

KR: How do you plan to market this?

CC: Is there a way to bring in social features? You might want to consider an achievement system.

MM: That’s something we’ve talked about as well. 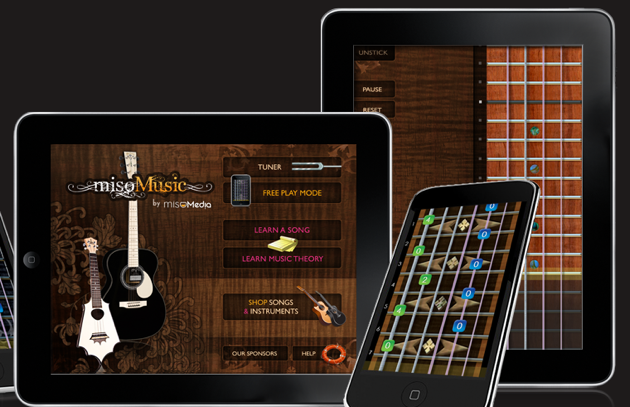