Intrigued by the experience of viewing a friend’s Twitter timeline, angel investor Shervin Pishevar collaborated with 15 year-old iTunes Instant creator Stephen Ou to create Twtroulette.com after a week of work.

With Twtroulette, users can now visit what industry notables like Mike Arrington, investor Brad Feld, and YouTube’s Hunter Walk see when they open Twitter i.e. what it’s like to follow the people they are following. People can also volunteer their own timelines by adding themselves to the directory. And, like Chatroulette, there’s a random function so one can shuffle through profiles if they’re feeling lucky.

Twitter actually used to have this feature (called “With Friends”) but took it away because relatively few people accessed it. Apparently some users still wanted to have the option to sneak peeks of what other Twitter users see — Pishevar describes his motivation behind the project;

But I was fascinated. I was seeing a view of the world curated by someone else that I couldn’t see anywhere else. In the current world, I only get a sliver of this view via the small percentage of tweets that my friend might share, RT or comment on. By accessing each other’s full timelines we get to peek into each other’s world views.”

Ou’s Twtroulette is one of the first projects launched through Pishevar’s nascent incubator, incubator.co. Pishevar and Ou plan on adding more features that further expand the use case possibilities of Twitter shortly. 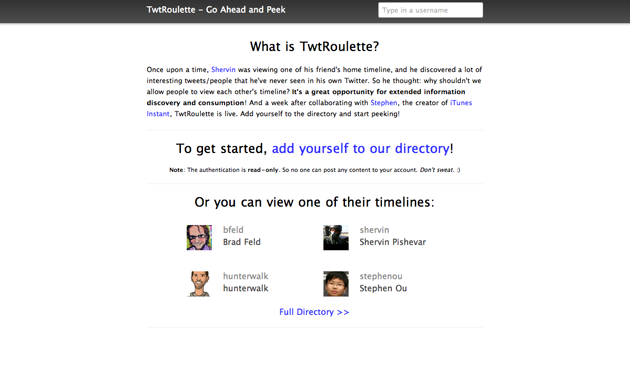 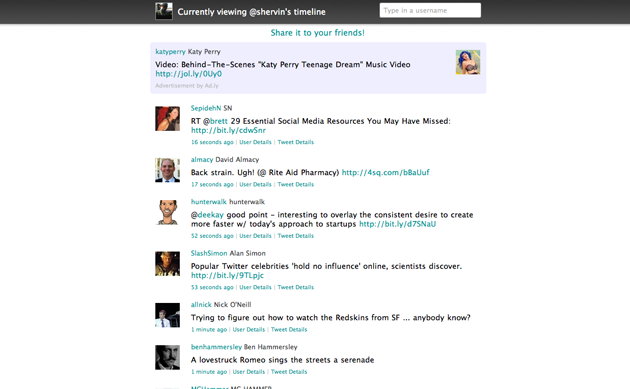