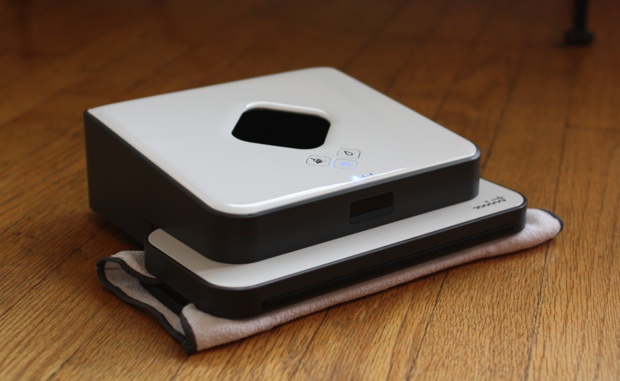 Short version: It’s not for everybody, but it sure is for guys like me. This cleaning bot for hardwood floors is a dream come true for dust-haters, and it’s cute to boot.

The Mint is one of the growing number of floor-cleaning robots that evolved after the success of the Roomba. Unlike many of the others, though, the Mint works on different principles and should be viewed as separate but related, as opposed to the cut-rate or imitation Roombas out there. This is a different product.

If you like videos… look, I made one just for you!

Unlike many of the other floorbots, the Mint is not a traveling vacuum. It’s a traveling Swiffer. It’s intended for use in houses with hardwood floors, though of course tile, linoleum, or any hard, flat surface will also work. It uses Swiffer cloths or anything that size; it comes with a few microfiber cloths (a fine one for normal use, a coarse one for mopping) which work fine, and I imagine a couple paper towels or a washcloth would do in a pinch, if you absolutely needed it to do a sweep.

Once you’ve loaded it with a cloth, you just set it in the middle of the room and press the sweep button. It comes with a little cube a little smaller than a can of soup that goes in the room and which the Mint uses as a sort of beacon. The manual says to make sure the Mint can see the ceiling, so I’m guessing the cube projects an IR grid up there or something.

Once you’ve pressed the button, the Mint goes off in whatever direction it’s pointing and starts cruising around, going in a there-and-back pattern. It’s very quiet, and the only noise you’ll hear will be the occasional bump as it finds a wall or table leg, after which it remembers its position and maneuvers around it. 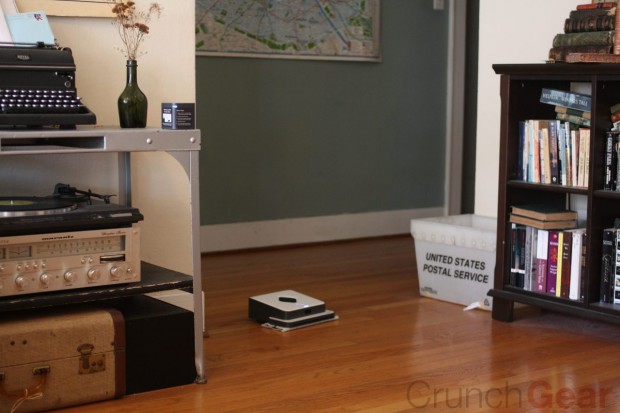 I was concerned that it would limit itself to whatever room the cube was in, but it scooted merrily off into a hallway and into my bedroom, from which I was sure it would not return. But it did, with a grill full of dust bunnies, and continued its job. It’ll return to the same place you left it when it feels it’s done.

So far, so narrative. But does it work? Depends on what you need it to do. I have a medium-sized one-bedroom apartment with hardwood floors, and since I live in the city, I get a fair amount of dust and lint traffic through my windows and off my bags, coats, etc. I try to sweep, but I end up throwing a lot into the air, and of course it takes ages if you’re thorough like me. I had just swept when I got the Mint, and on its first sweep it brought back so much treasure (i.e. dust and fuzz) that I questioned my cleaning ability. Since then I’ve run it every few days and it regularly comes back with a good amount of dust. If you have a dust allergy like me, or simply don’t like the idea of billions of dust mites mating all over your apartment, the Mint is right up your alley.

It navigates quite well, though there is also disappointment there: it doesn’t actually “remember” the layout of your place. That would have been awesome. No, it starts from scratch every time, building a map and cleaning however it thinks best. Its compact body and square shape let it get right along the edges of walls, where dust bunnies tend to congregate, and at 3″ tall it’s short enough to get under most couches. I found that the two things that gave it grief in my apartment were cords running along the floor and my desk chair, which has a part exactly at the height required to trap the robot.

One thing to note: this little guy actually has some torque, and was pushing a small trash can around like it was nothing. There’s a risk that light or small decorations or containers could be knocked over, though the robot was gentle as a rule with table legs and walls (no need to worry about marks). It also will push open doors that aren’t actually closed. A virtual wall or something would have been nice.

I don’t have any rugs or carpeted rooms, but I know many others do, and it’s worth saying that as long as this guy can navigate around them, it will simply treat them as “walls,” but will not clean them. I suspect it might leave a few dustballs on the tassels.

The mopping function is… well, I wouldn’t call it mopping. It’s rubbing with a damp cloth. Sometimes that’s a good thing, but it’s not going to pick up dried coffee stains or anything. Using a different cloth and a more scrubby pattern makes it good for wiping down kitchen floors that may be tacky from drops of juice and such, but it doesn’t have nearly the mopping power of a Scooba (of course, it’s simpler and cheaper as well).

The Mint lasts about 3 hours on a charge according to the manual, which seemed about right to me. It moves pretty quickly, and managed to sweep my place twice and mop the kitchen twice before running down. Charging could be prettier: the plug is on the Mint’s underside, so it has to sit on its head or lie on its back while charging. Not nearly as cool as the other robots’ automatic charging stations. The Mint does have a little handle, though, so you don’t have to pick it up by the “filthy rag” or “grit-covered wheels” components.

Another thing Mint lacks is the ability to schedule, though of course that wouldn’t make much sense when you have to change its little cloth. This isn’t a “set it and forget it” type of device, it’s one that does 90% of your work for you, but still needs a hand every once in a while.

While it’s not as powerful or automatic as the Roomba or Neato, I guarantee that the Mint is a valuable little device. Because it uses cloth, it picks up a huge amount of dust that even vacuum cleaners would miss, and it navigates intelligently enough that you don’t have to worry about whether a part of the room will be neglected. That said, it also requires more from the user: a conscious “time to get out the robot” effort and constant replacing or washing of the cloths might be too great a sacrifice of convenience for people who want a truly hands-off cleaning bot. But for a guy like me, who has all wood floors and whose priority is eliminating dust, and who doesn’t mind a little light maintenance, it’s a great option.