My love affair with Quora continues. I simply can’t think of another site where so much useful information is being organized so rapidly in one place. You’ve got experts fielding anonymous questions. You’ve got high-profile people answering questions about themselves or their companies. And you’ve got juicy speculation.

At TechCrunch, part of what we do is gather information and hunt down sources to find out if it’s true or not. But what if Quora could replace that? What if they can take that hunt public? One question posed on the service yesterday may put that to the test.

Someone asked the question, “Is Carol Bartz in the process of being replaced?” This is a hot topic on the Internet these days given Yahoo’s lack of turnaround under her watch as CEO. And we even wrote about some of the speculation we’ve be hearing yesterday as well. But Quora offers up a more direct answer: Yes.

Specifically, this is the response to the question on Quora:

Yes. From what I understand serious conversations are being had about taking Yahoo private (which is a good thing) and as part of that Carol would be fired, on this one the record speaks for itself:

The person giving the response seems to have some knowledge about Yahoo that goes beyond common knowledge. For example, they seem to know how much Yahoo is spending on ad campaigns, and they know Yahoo executives like Hillary Schneider and what they’re working on. This would seem to indicate the person either works at Yahoo, worked at Yahoo, or is close with people who work at Yahoo.

Of course, this could all be complete BS. The fact that the user is anonymous doesn’t help. But rarely will you find a source willing to go on the record about stuff such as this. So that’s not enough to completely discount it. And clearly others agree. Nine people voted up this response, including Michael Wolfe, an EiR at Benchmark Capital, and Keith Rabois, a prominent entrepreneur/investor who is now the general manager at Square.

For all I know, this anonymous user is getting their information from the same banking sources that are spreading this type of stuff around. Or it could simply be some random person well-versed in tech stuff having some fun with speculation. But if this does play out the way the user lays out, then what? I don’t know. But I do know that will be a huge win for Quora. 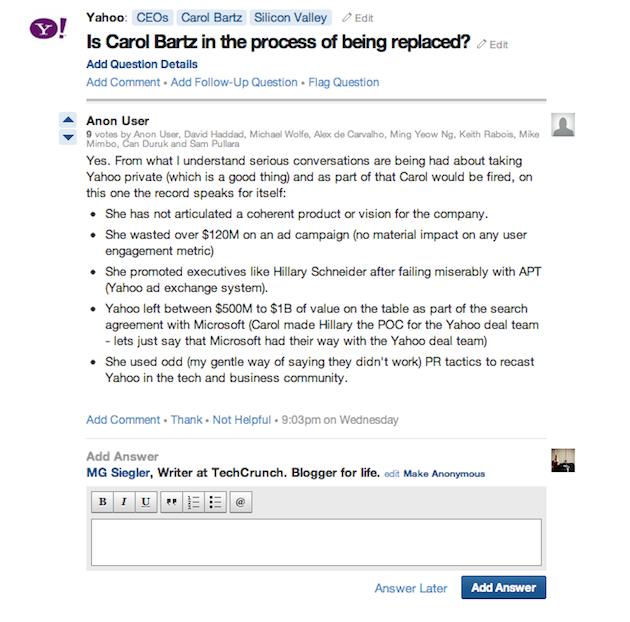