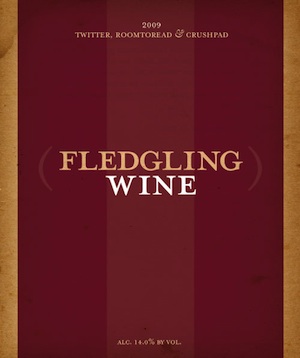 Just about a year ago, Twitter revealed a project called The Fledgling Initiative. No, it wasn’t some new secret Twitter feature, instead it was a project that would see Twitter make its own wine. Yes, wine. But for a good cause — Room to Read, the non-profit that’s all about extending literacy and the education of children around the world. But at the time, Twitter warned it would be quite a while before the wine was ready to sell. Well, a year later, it finally is.

In a post today on their blog, Twitter co-founder Biz Stone notes that this weekend the wine will be available. People who pre-ordered should get their shipments shortly. Meanwhile, there are still bottles and cases to be bought here.

The wine, which is called Fledgling wine, is available in two varieties: a white (chardonnay) and a red (pinot noir). Each 750ml bott is $25, or you can buy a whole case (12 bottles) for $300. Both are 2009 vintage that Stone says “are being made using some of the best vineyards in California by the acclaimed winemaking team at Crushpad.” “Incidentally, 2009 appears to be an excellent vintage in California, potentially one of the best of the decade,” he continues.

Specifically, these bottles being sold will help promote literacy in Uttarakhand, India.

Meanwhile, I asked Twitter if we can expect to see the wine in stores anytime soon. “Just the web site for now. But we’d love to see it in stores and other places!,” a representative told me.