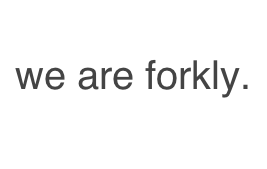 Brightkite has always been an interesting startup. They were in the location game early (a 2007 TechStars launch) — perhaps a bit too early, as the true hype in the space has only really began in the past year or so. Nevertheless, they were able to get an exit (well, sort of a merger/exit) in 2009. And they’ve been able to accumulate over 2 million users. And they’re still plugging away at location — but going forward, they’ll be doing that without two founders, Brady Becker and Martin May.

May actually left a couple months ago, as Brightkite noted with a farewell post. But Becker has also left, we’re hearing. And his bio page seems to confirm this. And while they may be out of Brightkite, they’re not out of the location game, we’re also hearing.

We’re told that Becker and May have started a new stealth startup called Forkly. The service’s website gives no clue as to what it is beyond the phrase “we are forkly.” But the Twitter account indicates that both Becker and May are working on it (those are the only two accounts it follows), and states that “We’re a new, stealthy startup in Denver.”

Becker’s LinkedIn also says that he’s currently the founder of Forkly.com (and YouAreHere), but gives no more info. May’s bio doesn’t say anything about Forkly, but he is the mayor of its headquarters in Denver (which apparently used to be a restaurant).

But a source tells us that Forkly is definitely a new startup in the location space. This obviously makes sense given both Becker’s and May’s experience and areas of expertise. Aside from Brightkite, the two were also the driving force behind Check.in, the multiple check-in web app being run under the Brightkite banner. (The two of them actually demoed it for us at SXSW this past year.)

We’ll try to dig up more about Forkly. Stay tuned.

Update: I’ve just confirmed with Becker that he did recently leave Brightkite and that yes, Forkly is his new startup. He declined to give more information about it at this time. 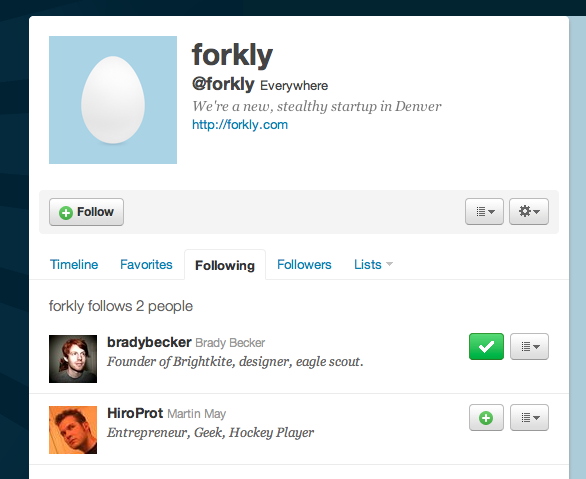