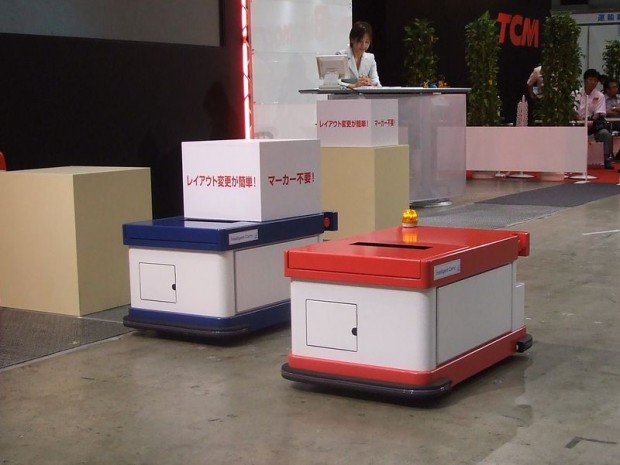 It’s not as cute as Muratec’s MKR-003, but Hitachi’s new transportation robot looks pretty sophisticated, too. Much like the MKR-003, Hitachi’s model, dubbed “Intelligent Carry” [JP], can move around and take care of simple chores autonomously. Hitachi has developed a special algorithm called “SLAM” (Simultaneous Localization and Mapping) that helps the robot in sizing up its environment quickly and then explore it without human help.

Intelligent Carry is equipped with a high-precision laser measurement sensor called SICK, which was developed by a German company and makes sure the robot detects objects and boundaries in its environment in a reliable way (the robot has another laser range sensor, made by Japan-based Hokuyo, on board as well).

Hitachi says Intelligent Carry, in its current form, is best suited for deliveries of goods in a 30m radius and that the top model reaches a top speed of 7.2km/h. It doesn’t need markers to identify objects or boundaries and can carry loads weighing up to 1,000kg.

The company is currently expecting the robot to generate $47 million in sales in the year 2015, mainly targeting customers like semiconductor makers, food companies and medical firms.