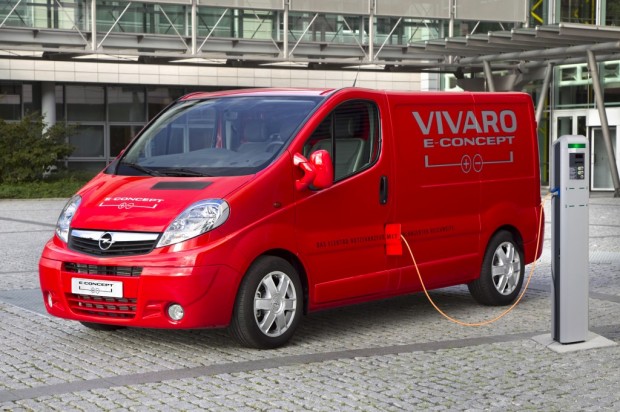 Maybe it’s true after all; GM using its Voltec platform for something other than a compact/midsize sedan, a cargo van named Vivaro. Expected to be unveiled tomorrow at the IAA Commercial Vehicles Fair in Hannover, GM will showcase Vivaro for those interested in low fuel consumption–like a small organic farm that only needs to make small deliveries around the city.

Opel will be the name under which Vivaro will be placed, but if reception goes well then hopefully Chevy will carry the name in the states. The van has 5 cubic meteres of cargo space and can hold payloads up to 750 kg–meaning a great delivery van in the city. Lithium ion battery packs power the van and are mounted in the floor–similar to the Volt. Travel is expected to last up to 60 miles on electricity alone; after the gas-powered motor will extend the range to 250 miles.

“We are convinced that we will get a fantastic reaction from the people who use such vehicles on a daily basis: Electric mobility will allow them to travel in city areas which are now off-limits to petrol and diesel-powered vehicles and the range-extender technology makes it possible to use an electric van for normal routine business,” says Chris Lacey, Executive Director, International Operations Opel/Vauxhall Commercial Vehicles.

GM spokesperson Randal Fox said there are no plans to actually build the concept nor bring it to the states, but if the past can teach us anything about GM, learn that “no plans” actually means we’ll wait and see. Does this mean an entire fleet of Voltec vehicles in the future?